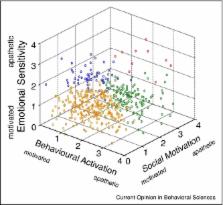 Apathy is the most common neuropsychiatric symptom in patients with Alzheimer's disease (AD). The presence of apathy has been related to greater caregiver distress, decreased quality of life, and increased morbidity. Here we review the most recent studies on this neuropsychiatric syndrome, focusing on prevalence, impact on quality of life, behavioural and neuroimaging studies, and treatment options. The results of some investigations on the behavioural and neuroanatomical profile of apathy in AD point to a role of frontostriatal circuits, specifically involving the anterior cingulate cortex. However, small and heterogeneous samples, lack of control for disease severity, and non-specific apathy scales complicate interpretation of results. Future studies might benefit from studying multiple dimensions of apathy within conceptual frameworks which allow for a deconstruction of underlying mechanisms.

J. Cummings (1997)
The Neuropsychiatric Inventory (NPI) was developed to assess psychopathology in dementia patients. It evaluates 12 neuropsychiatric disturbances common in dementia: delusions, hallucinations, agitation, dysphoria, anxiety, apathy, irritability, euphoria, disinhibition, aberrant motor behavior, night-time behavior disturbances, and appetite and eating abnormalities. The severity and frequency of each neuropsychiatric symptom are rated on the basis of scripted questions administered to the patient's caregiver. The NPI also assesses the amount of caregiver distress engendered by each of the neuropsychiatric disorders. A total NPI score and a total caregiver distress score are calculated, in addition to the scores for the individual symptom domains. Content validity, concurrent validity, inter-rater reliability, and test-retest reliability of the NPI are established. Different neurologic disorders have characteristic neuropsychiatric manifestations and distinctive NPI profiles. The NPI is sensitive to treatment effects and has demonstrated the amelioration of behavioral symptoms in Alzheimer's disease by cholinergic agents. The NPI is a useful instrument for characterizing the psychopathology of dementia syndromes, investigating the neurobiology of brain disorders with neuropsychiatric manifestations, distinguishing among different dementia syndromes, and assessing the efficacy of treatment.

Reliability and validity of the Apathy Evaluation Scale.

R Marín,  S Firinciogullari,  R C Biedrzycki (1991)
This article presents evidence for the reliability and construct validity of the Apathy Evaluation Scale (AES). Conceptually, apathy is defined as lack of motivation not attributable to diminished level of consciousness, cognitive impairment, or emotional distress. Operationally, the AES treats apathy as a psychological dimension defined by simultaneous deficits in the overt behavioral, cognitive, and emotional concomitants of goal-directed behavior. Three versions of the AES (clinician, informant, and self-rated) were evaluated for 123 subjects, ages 53-85, meeting research criteria for right or left hemisphere stroke, probable Alzheimer's disease, major depression, or well elderly control. Multiple forms of reliability (internal consistency, test-retest, and interrater) were satisfactory. Several types of validity evidence are presented for each version of the scale, including the following: ability of the AES to discriminate between groups according to mean levels of apathy, discriminability of apathy ratings from standard measures of depression and anxiety, convergent validity between the three versions of the scale, and predictive validity measures derived from observing subjects' play with novelty toys and videogames. Guidelines for the administration of the AES are presented, along with suggestions for potential applications of the scale to clinical and research questions.

The prevalence of neuropsychiatric symptoms in Alzheimer's disease: Systematic review and meta-analysis.