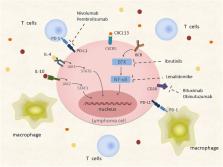 Primary central nervous system lymphoma (PCNSL) is a group of extranodal non-Hodgkin lymphoma that exhibits specific biological characteristics and clinical behavior, with an aggressive disease course and unsatisfactory patient outcomes. It is of great importance to identify aberrant genetic loci and important molecular pathways that might suggest potential targets for new therapeutics and provide prognostic information. In this review, we listed various genetic and epigenetic alterations that are involved in PCNSL pathogenesis. In the aspect of treatment, we summarized the related literatures and evaluated the efficacy of surgery, induction chemotherapy, radiotherapy, intrathecal chemotherapy, and autologous stem cell transplantation in PCNSL. We also proposed the possible new agents for recurrent and relapse PCNSL based on the result of recent clinical researches.

Mechanism and control of V(D)J recombination at the immunoglobulin heavy chain locus.

F Alt,  Cosmas Giallourakis,  Kurt W. Alt … (2005)
V(D)J recombination assembles antigen receptor variable region genes from component germline variable (V), diversity (D), and joining (J) gene segments. For B cells, such rearrangements lead to the production of immunoglobulin (Ig) proteins composed of heavy and light chains. V(D)J is tightly controlled at the Ig heavy chain locus (IgH) at several different levels, including cell-type specificity, intra- and interlocus ordering, and allelic exclusion. Such controls are mediated at the level of gene segment accessibility to V(D)J recombinase activity. Although much has been learned, many long-standing questions regarding the regulation of IgH locus rearrangements remain to be elucidated. In this review, we summarize advances that have been made in understanding how V(D)J recombination at the IgH locus is controlled and discuss important areas for future investigation.

Report of an international workshop to standardize baseline evaluation and response criteria for primary CNS lymphoma.

Martin Laan,  Edward Neuwelt,  Elisa Pulczynski … (2005)
Standardized guidelines for the baseline evaluation and response assessment of primary CNS lymphoma (PCNSL) are critical to ensure comparability among clinical trials for newly diagnosed patients. The relative rarity of this tumor precludes rapid completion of large-scale phase III trials and, therefore, our reliance on the results of well-designed phase II trials is critical. To formulate this recommendation, an international group of experts representing hematologic oncology, medical oncology, neuro-oncology, neurology, radiation oncology, neurosurgery, and ophthalmology met to review current standards of reporting and to formulate a consensus opinion regarding minimum baseline evaluation and common standards for assessing response to therapy. The response guidelines were based on the results of neuroimaging, corticosteroid use, ophthalmologic examination, and CSF cytology. A critical issue that requires additional study is the optimal method to assess the neurocognitive impact of therapy and address the quality of life of PCNSL survivors. We hope that these guidelines will improve communication among investigators and comparability among clinical trials in a way that will allow us to develop better therapies for patients.

Achille Ambrosetti,  Bettina Borisch,  Annarita Conconi … (2003)
To identify survival predictors and to design a prognostic score useful for distinguishing risk groups in immunocompetent patients with primary CNS lymphomas (PCNSL). The prognostic role of patient-, lymphoma-, and treatment-related variables was analyzed in a multicenter series of 378 PCNSL patients treated at 23 cancer centers from five different countries. Age more than 60 years, performance status (PS) more than 1, elevated lactate dehydrogenase (LDH) serum level, high CSF protein concentration, and involvement of deep regions of the brain (periventricular regions, basal ganglia, brainstem, and/or cerebellum) were significantly and independently associated with a worse survival. These five variables were used to design a prognostic score. Each variable was assigned a value of either 0, if favorable, or 1, if unfavorable. The values were then added together to arrive at a final score, which was tested in 105 assessable patients for which complete data of all five variables were available. The 2-year overall survival (OS) +/- SD was 80% +/- 8%, 48% +/- 7%, and 15% +/- 7% (P =.00001) for patients with zero to one, two to three, and four to five unfavorable features, respectively. The prognostic role of this score was confirmed by limiting analysis to assessable patients treated with high-dose methotrexate-based chemotherapy (2-year OS +/- SD: 85% +/- 8%, 57% +/- 8%, and 24% +/- 11%; P =.0004). Age, PS, LDH serum level, CSF protein concentration, and involvement of deep structures of the brain were independent predictors of survival. A prognostic score including these five parameters seems advisable in distinguishing different risk groups in PCNSL patients. The proposed score and its relevance in therapeutic decision deserve to be validated in further studies.