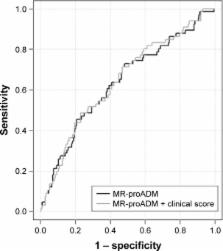 Exacerbations of COPD (ECOPD) are a frequent cause of emergency room (ER) visits. Predictors of early outcome could help clinicians in orientation decisions. In the current study, we investigated whether mid-regional pro-adrenomedullin (MR-proADM) and copeptin, in addition to clinical evaluation, could predict short-term outcomes.

This prospective blinded observational study was conducted in 20 French centers. Patients admitted to the ER for an ECOPD were considered for inclusion. A clinical risk score was calculated, and MR-proADM and copeptin levels were determined from a venous blood sample. The composite primary end point comprised 30-day death or transfer to the intensive care unit or a new ER visit.

MR-proADM but not copeptin was significantly associated with outcomes at 30 days, even after adjustment for clinical risk category. Overall, MR-proADM, alone or combined with the clinical risk score, was a moderate strong predictor of short-term outcomes.

Joachim Struck,  Nils Morgenthaler,  Andreas Bergmann … (2005)
Adrenomedullin (ADM) is a potent vasodilatory peptide, and circulating concentrations have been described for several disease states, including dysfunction of the cardiovascular system and sepsis. Reliable quantification has been hampered by the short half-life, the existence of a binding protein, and physical properties. Here we report the technical evaluation of an assay for midregional pro-ADM (MR-proADM) that does not have these problems. MR-proADM was measured in a sandwich immunoluminometric assay using 2 polyclonal antibodies to amino acids 45-92 of proADM. The reference interval was defined in EDTA plasma of 264 healthy individuals (117 male, 147 female), and increased MR-proADM concentrations were found in 95 patients with sepsis and 54 patients with cardiovascular disease. The assay has an analytical detection limit of 0.08 nmol/L, and the interassay CV was 0.12 nmol/L. The assay was linear on dilution with undisturbed recovery of the analyte. EDTA-, heparin-, and citrate-plasma samples were stable (<20% loss of analyte) for at least 3 days at room temperature, 14 days at 4 degrees C, and 1 year at -20 degrees C. MR-proADM values followed a gaussian distribution in healthy individuals with a mean (SD) of 0.33 (0.07) nmol/L (range, 0.10-0.64 nmol/L), without significant difference between males or females. The correlation coefficient for MR-proADM vs age was 0.50 (P < 0.001). MR-proADM was significantly (P < 0.001) increased in patients with cardiovascular disease [median (range), 0.56 (0.08-3.9) nmol/L] and patients with sepsis [3.7 (0.72-25.4) nmol/L]. MR-proADM is stable in plasma of healthy individuals and patients. MR-proADM measurements may be useful for evaluating patients with sepsis, systemic inflammation, or heart failure.

Copeptin, C-reactive protein, and procalcitonin as prognostic biomarkers in acute exacerbation of COPD.

Jörg Daniel Leuppi,  Nils Morgenthaler,  Christian Müller … (2007)
A novel approach to estimate the severity of COPD exacerbation and predict its outcome is the use of biomarkers. We assessed circulating levels of copeptin, the precursor of vasopressin, C-reactive protein (CRP), and procalcitonin as potential prognostic parameters for in-hospital and long-term outcomes in patients with acute exacerbation of COPD (AECOPD) requiring hospitalization. Data of 167 patients (mean age, 70 years; mean FEV(1), 39.9 +/- 16.9 of predicted [+/- SD]) presenting to the emergency department due to AECOPD were analyzed. Patients were evaluated based on clinical, laboratory, and lung function parameters on hospital admission, at 14 days, and at 6 months. Plasma levels of all three biomarkers were elevated during the acute exacerbation (p /= 40 pmol/L and a history of hospitalization (p < 0.0001). We suggest copeptin as a prognostic marker for short-term and long-term prognoses in patients with AECOPD requiring hospitalization.