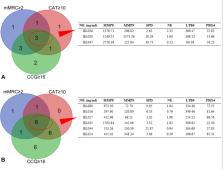 The aim of this study was to analyse the level of serum matrix metalloproteinases (MMPs) in atopic and non-atopic COPD patients, providing guidance for clinical practice and theory for atopic COPD.

In general, tIgE and MMP8 levels were higher in atopic COPD patients than in non-atopic patients. NE levels were closely correlated with the basophil rate of induced sputum and FeNO levels, which may play an important role in the pathogenesis and development of atopic COPD.

Matrix metalloproteinases -8, -9 and -12 in smokers and patients with Stage 0 COPD

Helen Ilumets,  Paula Rytilä,  Ingel Demedts … (2007)
COPD is underdiagnosed and its early assessment is problematic. It has been suggested that symptomatic smokers with normal FEV1/FVC (Stage 0 COPD, GOLD criteria) can develop COPD in the future. Potential early biomarkers in COPD include the matrix metallo-proteinases (MMPs). It is not yet known, whether alterations in MMP expression are associated with smoking alone or with the risk of developing COPD. In this cross-sectional study MMP-8, MMP-9 and MMP-12 were determined from induced sputum and plasma by ELISA, immunocytochemistry, zymography, and/or Western blot in non-smokers (n = 32), smokers with symptoms (Stage 0, GOLD criteria) (n = 23) or without symptoms (n = 23). Only MMP-8 differentiated Stage 0 COPD from non-symptomatic smokers (p = 0.02). MMP-9 levels were significantly elevated in the induced sputum of non-symptomatic smokers and Stage 0 COPD (p = 0.01, p < 0.001) compared to non-smokers, but did not differ between the two subgroups of smokers. MMP-12 was higher only at Stage 0 compared to non-smokers (p = 0.04). MMP-8, MMP-9 and MMP-12 immunoreactivity was localized in macrophages and neutrophils, especially in smokers. MMP-8 levels correlated significantly with the small airway flow parameters (MEF50, MEF25) (p = 0.005 and p = 0.0004) and markers of neutrophil activation (myeloperoxidase, lactoferrin). In conclusion MMP-8 may differentiate Stage 0 from healthy smokers.

Wen Tian,  Stanley Rockson,  Xinguo Jiang … (2017)
Acquired lymphedema is a cancer sequela and a global health problem currently lacking pharmacologic therapy. We have previously demonstrated that ketoprofen, an anti-inflammatory agent with dual 5-lipoxygenase and cyclooxygenase inhibitory properties, effectively reverses histopathology in experimental lymphedema. We show that the therapeutic benefit of ketoprofen is specifically attributable to its inhibition of the 5-lipoxygenase metabolite leukotriene B4 (LTB4). LTB4 antagonism reversed edema, improved lymphatic function, and restored lymphatic architecture in the murine tail model of lymphedema. In vitro, LTB4 was functionally bimodal: Lower LTB4 concentrations promoted human lymphatic endothelial cell sprouting and growth, but higher concentrations inhibited lymphangiogenesis and induced apoptosis. During lymphedema progression, lymphatic fluid LTB4 concentrations rose from initial prolymphangiogenic concentrations into an antilymphangiogenic range. LTB4 biosynthesis was similarly elevated in lymphedema patients. Low concentrations of LTB4 stimulated, whereas high concentrations of LTB4 inhibited, vascular endothelial growth factor receptor 3 and Notch pathways in cultured human lymphatic endothelial cells. Lymphatic-specific Notch1–/– mice were refractory to the beneficial effects of LTB4 antagonism, suggesting that LTB4 suppression of Notch signaling is an important mechanism in disease maintenance. In summary, we found that LTB4 was harmful to lymphatic repair at the concentrations observed in established disease. Our findings suggest that LTB4 is a promising drug target for the treatment of acquired lymphedema.