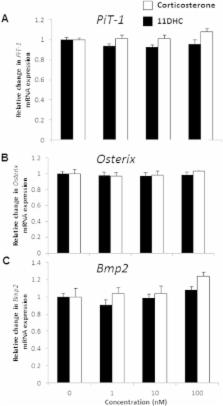 Vascular calcification, which is common in the elderly and in patients with atherosclerosis, diabetes and chronic renal disease, increases the risk of cardiovascular morbidity and mortality. It is a complex, active and highly regulated cellular process that resembles physiological bone formation. It has previously been established that pharmacological doses of glucocorticoids facilitate arterial calcification. However, the consequences for vascular calcification of endogenous glucocorticoid elevation have yet to be established. Glucocorticoids (cortisol, corticosterone) are released from the adrenal gland, but can also be generated within cells from 11-keto metabolites of glucocorticoids (cortisone, 11-dehydrocorticosterone [11-DHC]) by the enzyme, 11β-hydroxysteroid dehydrogenase type 1 (11β-HSD1). In the current study we hypothesized that endogenous glucocorticoids facilitate vascular smooth muscle cell (VSMC) calcification and investigated the receptor-mediated mechanism underpinning this process.

This study suggests that in mouse VSMCs, corticosterone acts through the MR to induce pro-calcification effects, and identifies 11β-HSD-inhibition as a novel potential treatment for vascular calcification.

D Proudfoot,  Thomas Bennett,  Roger P Weissberg … (2000)
The mechanisms involved in the initiation of vascular calcification are not known, but matrix vesicles, the nucleation sites for calcium crystal formation in bone, are likely candidates, because similar structures have been found in calcified arteries. The regulation of matrix vesicle production is poorly understood but is thought to be associated with apoptotic cell death. In the present study, we investigated the role of apoptosis in vascular calcification. We report that apoptosis occurs in a human vascular calcification model in which postconfluent vascular smooth muscle cell (VSMC) cultures form nodules spontaneously and calcify after approximately 28 days. Apoptosis occurred before the onset of calcification in VSMC nodules and was detected by several methods, including nuclear morphology, the TUNEL technique, and external display of phosphatidyl serine. Inhibition of apoptosis with the caspase inhibitor ZVAD.fmk reduced calcification in nodules by approximately 40%, as measured by the cresolphthalein method and alizarin red staining. In addition, when apoptosis was stimulated in nodular cultures with anti-Fas IgM, there was a 10-fold increase in calcification. Furthermore, incubation of VSMC-derived apoptotic bodies with (45)Ca demonstrated that, like matrix vesicles, they can concentrate calcium. These observations provide evidence that apoptosis precedes VSMC calcification and that apoptotic bodies derived from VSMCs may act as nucleating structures for calcium crystal formation.

Unique coexpression in osteoblasts of broadly expressed genes accounts for the spatial restriction of ECM mineralization to bone.

L V Avioli,  Alfred S. L. Cheng,  Thomas Yang … (1993)
Human bone marrow stromal cells were examined for their osteogenic potential in an in vitro cell culture system. Dexamethasone (Dex) treatment induced morphological transformation of these cells from an elongated to a more cuboidal shape, increased their alkaline phosphatase activity and cAMP responses to PTH and prostaglandin E2, and was essential for mineralization of the extracellular matrix. Dex-induced differentiation of human bone marrow stromal cells was apparent after 2-3 days of treatment and reached a maximum at 7-14 days, as judged by alkaline phosphatase activity, although induction of osteocalcin by 1,25-dihydroxyvitamin D3 was attenuated by Dex. Withdrawal of Dex resulted in an enhancement of the 1,25-dihydroxyvitamin D3-induced secretion of osteocalcin, whereas alkaline phosphatase activity and the cAMP response to PTH remained at prewithdrawal levels. The steady state mRNA level of osteonectin was not affected by Dex. Our results, which demonstrate that Dex conditions the differentiation of human bone marrow osteogenic stromal cells into osteoblast-like cells, support the hypothesis of a permissive effect of glucocorticoids in ensuring an adequate supply of mature osteoblast populations. Furthermore, the established human bone marrow stromal cell culture provides a good model of an in vitro system to study the regulation of differentiation of human bone osteoprogenitor cells.