Quantifying the Number of Pregnancies at Risk of Malaria in 2007: A Demographic Study 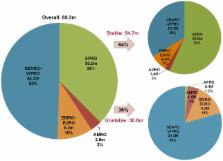 By combining data from the Malaria Atlas Project with country-specific data, Feiko ter Kuile and colleagues provide the first contemporary global estimates of the annual number of pregnancies at risk of malaria.

In 2007, 54.7 million pregnancies occurred in areas with stable P. falciparum malaria and a further 70.5 million in areas with exceptionally low malaria transmission or with P. vivax only. These represent the first contemporary estimates of the global distribution of the number of pregnancies at risk of P. falciparum and P. vivax malaria and provide a first step towards a more informed estimate of the geographical distribution of infection rates and the corresponding disease burden of malaria in pregnancy.

Malaria, a mosquito-borne parasitic disease, is a major global public-health problem. About half of the world's population is at risk of malaria, which kills about one million people every year. Most of these deaths are caused by Plasmodium falciparum, which thrives in tropical and subtropical regions. However, the most widely distributed type of malaria is P. vivax malaria, which also occurs in temperate regions. Most malaria deaths are among young children in sub-Saharan Africa, but pregnant women and their unborn babies are also very vulnerable to malaria. About 10,000 women and 200,000 babies die annually because of malaria in pregnancy, which can cause miscarriages, preterm births, and low-birth-weight births. Over the past decade, a three-pronged approach has been developed to prevent and control malaria in pregnancy. This approach consists of intermittent preventative treatment of pregnant women with antimalarial drugs, the use of insecticide-treated bed nets to protect pregnant women from the bites of infected mosquitoes, and management of malarial illness among pregnant women.

This strategy has begun to reduce the burden of malaria among pregnant women and their babies but the resources available for its introduction are very limited in many of the developing countries where malaria is endemic (always present). Policy makers in these countries need to know the number of pregnancies at risk of malaria so that they can use their resources wisely. However, although the World Health Organization recently estimated that more than 30 million African women living in malaria endemic areas become pregnant and are at risk for malaria each year, there are no comprehensive and contemporary estimates of the number of pregnancies at risk of malaria for endemic areas outside Africa. In this study, the researchers derive global estimates of the number of women who became pregnant in 2007 in areas with P. falciparum and P. vivax transmission.

These findings are the first contemporary estimates of the global distribution of the number of pregnancies at risk of P. falciparum and P. vivax malaria. They do not provide any information on the actual incidence of malaria during pregnancy or the health burden on mothers and unborn babies. They simply represent “any risk” of exposure. So, for example, the researchers calculate that only about 5,000 actual malaria infections may occur annually among the 70.5 million at-risk pregnancies in areas with very low malaria transmission or with P. vivax transmission only. Furthermore, these findings do not allow for the seasonality of malaria—pregnancies that occur outside of the transmission season may be at no or very low risk of malaria. Nevertheless, the estimates reported in this study are an important first step towards a spatial map of the burden of malaria in pregnancy and should help policy makers allocate resources for research into and control of this important public-health problem.

The global distribution of clinical episodes of Plasmodium falciparum malaria.

Robert W. Snow, Carlos Guerra, Abdisalan Noor … (2005)
Interest in mapping the global distribution of malaria is motivated by a need to define populations at risk for appropriate resource allocation and to provide a robust framework for evaluating its global economic impact. Comparison of older and more recent malaria maps shows how the disease has been geographically restricted, but it remains entrenched in poor areas of the world with climates suitable for transmission. Here we provide an empirical approach to estimating the number of clinical events caused by Plasmodium falciparum worldwide, by using a combination of epidemiological, geographical and demographic data. We estimate that there were 515 (range 300-660) million episodes of clinical P. falciparum malaria in 2002. These global estimates are up to 50% higher than those reported by the World Health Organization (WHO) and 200% higher for areas outside Africa, reflecting the WHO's reliance upon passive national reporting for these countries. Without an informed understanding of the cartography of malaria risk, the global extent of clinical disease caused by P. falciparum will continue to be underestimated.

D Balk, U Deichmann, G Yetman … (2006)
Evaluating the total numbers of people at risk from infectious disease in the world requires not just tabular population data, but data that are spatially explicit and global in extent at a moderate resolution. This review describes the basic methods for constructing estimates of global population distribution with attention to recent advances in improving both spatial and temporal resolution. To evaluate the optimal resolution for the study of disease, the native resolution of the data inputs as well as that of the resulting outputs are discussed. Assumptions used to produce different population data sets are also described, with their implications for the study of infectious disease. Lastly, the application of these population data sets in studies to assess disease distribution and health impacts is reviewed. The data described in this review are distributed in the accompanying DVD.

Publisher ID: 09-PLME-RA-1431R2
DOI: 10.1371/journal.pmed.1000221
PMC ID: 2811150
PubMed ID: 20126256
SO-VID: 8c79c664-ed8b-4065-aa3d-4d1e1efd6ddf
Copyright statement: Dellicour et al. This is an open-access article distributed under the terms of the Creative Commons Attribution License, which permits unrestricted use, distribution, and reproduction in any medium, provided the original author and source are credited.