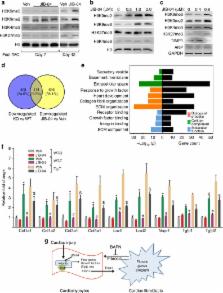 Left ventricular hypertrophy (LVH) is a major risk factor for cardiovascular morbidity and mortality. Pathological LVH engages transcriptional programs including reactivation of canonical fetal genes and those inducing fibrosis. Histone lysine demethylases (KDMs) are emerging regulators of transcriptional reprogramming in cancer, though their potential role in abnormal heart growth and fibrosis remains little understood. Here, we investigate gain and loss of function of an H3K9me2 specific demethylase, Kdm3a, and show it promotes LVH and fibrosis in response to pressure-overload. Cardiomyocyte KDM3A activates Timp1 transcription with pro-fibrotic activity. By contrast, a pan-KDM inhibitor, JIB-04, suppresses pressure overload-induced LVH and fibrosis. JIB-04 inhibits KDM3A and suppresses the transcription of fibrotic genes that overlap with genes downregulated in Kdm3a-KO mice versus WT controls. Our study provides genetic and biochemical evidence for a pro-hypertrophic function of KDM3A and proof-of principle for pharmacological targeting of KDMs as an effective strategy to counter LVH and pathological fibrosis.

Joshua G Travers,  Fadia Kamal,  Jeffrey Robbins … (2016)
Myocardial fibrosis is a significant global health problem associated with nearly all forms of heart disease. Cardiac fibroblasts comprise an essential cell type in the heart that is responsible for the homeostasis of the extracellular matrix; however, upon injury, these cells transform to a myofibroblast phenotype and contribute to cardiac fibrosis. This remodeling involves pathological changes that include chamber dilation, cardiomyocyte hypertrophy and apoptosis, and ultimately leads to the progression to heart failure. Despite the critical importance of fibrosis in cardiovascular disease, our limited understanding of the cardiac fibroblast impedes the development of potential therapies that effectively target this cell type and its pathological contribution to disease progression. This review summarizes current knowledge regarding the origins and roles of fibroblasts, mediators and signaling pathways known to influence fibroblast function after myocardial injury, as well as novel therapeutic strategies under investigation to attenuate cardiac fibrosis.

M Palma,  Marieke Essers,  Sanne Weijzen … (2004)
Forkhead transcription factors of the FOXO class are negatively regulated by PKB/c-Akt in response to insulin/IGF signalling, and are involved in regulating cell cycle progression and cell death. Here we show that, in contrast to insulin signalling, low levels of oxidative stress generated by treatment with H2O2 induce the activation of FOXO4. Upon treatment of cells with H2O2, the small GTPase Ral is activated and this results in a JNK-dependent phosphorylation of FOXO4 on threonine 447 and threonine 451. This Ral-mediated, JNK-dependent phosphorylation is involved in the nuclear translocation and transcriptional activation of FOXO4 after H2O2 treatment. In addition, we show that this signalling pathway is also employed by tumor necrosis factor alpha to activate FOXO4 transcriptional activity. FOXO members have been implicated in cellular protection against oxidative stress via the transcriptional regulation of manganese superoxide dismutase and catalase gene expression. The results reported here, therefore, outline a homeostasis mechanism for sustaining cellular reactive oxygen species that is controlled by signalling pathways that can convey both negative (PI-3K/PKB) and positive (Ras/Ral) inputs.

James Udelson,  Sunita Kramer,  D Maron … (2010)
Ventricular remodeling, first described in animal models of left ventricular (LV) stress and injury, occurs progressively in untreated patients after large myocardial infarction and in those with dilated forms of cardiomyopathy. The gross pathologic changes of increased LV volume and perturbation in the normal elliptical LV chamber configuration is driven, on a histologic level, by myocyte hypertrophy and apoptosis and by increased interstitial collagen. Each of the techniques used for tracking this process-echocardiography, radionuclide ventriculography, and cardiac magnetic resonance-carries advantages and disadvantages. Numerous investigations have demonstrated the value of LV volume measurement at a single time-point and over time in predicting clinical outcomes in patients with heart failure and in those after myocardial infarction. The structural pattern of LV remodeling and evidence of scarring on cardiac magnetic resonance have additional prognostic value. Beyond the impact of abnormal cardiac structure on cardiovascular events, the relationship between LV remodeling and clinical outcomes is likely linked through common local and systemic factors driving vascular as well as myocardial pathology. As demonstrated by a recent meta-analysis of heart failure trials, LV volume stands out among surrogate markers as strongly correlating with the impact of a particular drug or device therapy on patient survival. These findings substantiate the importance of ventricular remodeling as central in the pathophysiology of advancing heart failure and support the role of measures of LV remodeling in the clinical investigation of novel heart failure treatments. 2011 American College of Cardiology Foundation. Published by Elsevier Inc. All rights reserved.