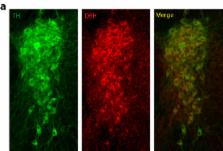 Loss of noradrenergic locus coeruleus (LC) neurons is a prominent feature of aging–related neurodegenerative diseases, like Parkinson’s disease (PD). The basis of this vulnerability is not understood. To explore possible physiological determinants, LC neurons were studied using electrophysiological and optical approaches in ex vivo mouse brain slices. These studies revealed that autonomous activity in LC neurons was accompanied by oscillations in dendritic Ca 2+ concentration attributable to opening of L–type Ca 2+ channels. This oscillation elevated mitochondrial oxidant stress and was attenuated by inhibition of nitric oxide synthase. The relationship between activity and stress was malleable, as arousal and carbon dioxide, each increased the spike rate, but differentially affected mitochondrial oxidant stress. Oxidant stress also was increased in an animal model of PD. Thus, our results point to activity–dependent Ca 2+ entry and a resulting mitochondrial oxidant stress as factors contributing to the vulnerability of LC neurons.

S J Remington,  Timothy Dore,  G. Hanson … (2004)
Changes in the redox equilibrium of cells influence a host of cell functions. Alterations in the redox equilibrium are precipitated by changing either the glutathione/glutathione-disulfide ratio (GSH/GSSG) and/or the reduced/oxidized thioredoxin ratio. Redox-sensitive green fluorescent proteins (GFP) allow real time visualization of the oxidation state of the indicator. Ratios of fluorescence from excitation at 400 and 490 nm indicate the extent of oxidation and thus the redox potential while canceling out the amount of indicator and the absolute optical sensitivity. Because the indicator is genetically encoded, it can be targeted to specific proteins or organelles of interest and expressed in a wide variety of cells and organisms. We evaluated roGFP1 (GFP with mutations C48S, S147C, and Q204C) and roGFP2 (the same plus S65T) with physiologically or toxicologically relevant oxidants both in vitro and in living mammalian cells. Furthermore, we investigated the response of the redox probes under physiological redox changes during superoxide bursts in macrophage cells, hyperoxic and hypoxic conditions, and in responses to H(2)O(2)-stimulating agents, e.g. epidermal growth factor and lysophosphatidic acid.

F BLOOM,  Gary Aston-Jones (1981)
Spontaneous discharge of norepinephrine-containing locus coeruleus (NE-LC) neurons was examined during the sleep-walking cycle (S-WC) in behaving rats. Single unit and multiple unit extracellular recordings yielded a consistent set of characteristic discharge properties. (1) Tonic discharge co-varied with stages of the S-WC, being highest during waking, lower during slow wave sleep, and virtually absent during paradoxical sleep. (2) Discharge anticipated S-WC stages as well as phasic cortical activity, such as spindles, during slow wave sleep. (3) Discharge decreased within active waking during grooming and sweet water consumption. (4) Bursts of impulses accompanied spontaneous or sensory-evoked interruptions of sleep, grooming, consumption, or other such ongoing behavior. (5) These characteristic discharge properties were topographically homogeneous for recordings throughout the NE-LC. (6) Phasic robust activity was synchronized markedly among neurons in multiple unit populations. (7) Field potentials occurred spontaneously in the NE-LC and were synchronized with bursts of unit activity from the same electrodes. (8) Field potentials became dissociated from unit activity during paradoxical sleep, exhibiting their highest rates in the virtual absence of impulses. These results are generally consistent with previous proposals that the NE-LC system is involved in regulating cortical and behavioral arousal. On the basis of the present data and those described in the following report (Aston-Jones, G., and F. E. Bloom (1981) J. Neurosci.1: 887-900), we conclude that these neurons may mediate a specific function within the general arousal framework. In brief, the NE-LC system may globally bias the responsiveness of target neurons and thereby influence overall behavioral orientation.

Fluorescent and luminescent probes for measurement of oxidative and nitrosative species in cells and tissues: progress, pitfalls, and prospects.

P. Wardman (2007)
Chemical probes for free radicals in biology are important tools; fluorescence and chemiluminescence offer high detection sensitivity. This article reviews progress in the development of probes for "reactive oxygen and nitrogen" species, emphasizing the caution needed in their use. Reactive species include hydrogen peroxide; hydroxyl, superoxide, and thiyl radicals; carbonate radical-anion; and nitric oxide, nitrogen dioxide, and peroxynitrite. Probes based on reduced dyes lack selectivity and may require a catalyst for reaction: despite these drawbacks, dichlorodihydrofluorescein and dihydrorhodamine have been used in well over 2,000 studies. Use in cellular systems requires loading into cells, and minimizing leakage. Reactive species can compete with intracellular antioxidants, changes in fluorescence or luminescence possibly reflecting changes in competing antioxidants rather than free radical generation rate. Products being measured can react further with radicals, and intermediate probe radicals are often reactive toward antioxidants and especially oxygen, to generate superoxide. Common probes for superoxide and nitric oxide require activation to a reactive intermediate; activation is not achieved by the radical of interest and the response is thus additionally sensitive to this first step. Rational use of probes requires understanding and quantitation of the mechanistic pathways involved, and of environmental factors such as oxygen and pH. We can build on this framework of knowledge in evaluating new probes.