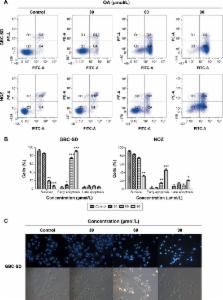 Oleanolic acid (OA), a naturally occurring triterpenoid, exhibits potential antitumor activity in many tumor cell lines. Gallbladder carcinoma is the most common malignancy of the biliary tract, and is a highly aggressive tumor with an extremely poor prognosis. Unfortunately, the effects of OA on gallbladder carcinoma are unknown. In this study, we investigated the effects of OA on gallbladder cancer cells and the underlying mechanism. The results showed that OA inhibits proliferation of gallbladder cancer cells in a dose-dependent and time-dependent manner on MTT and colony formation assay. A flow cytometry assay revealed apoptosis and G0/G1 phase arrest in GBC-SD and NOZ cells. Western blot analysis and a mitochondrial membrane potential assay demonstrated that OA functions through the mitochondrial apoptosis pathway. Moreover, this drug inhibited tumor growth in nude mice carrying subcutaneous NOZ tumor xenografts. These data suggest that OA inhibits proliferation of gallbladder cancer cells by regulating apoptosis and the cell cycle process. Thus, OA may be a promising drug for adjuvant chemotherapy in gallbladder carcinoma.

Emad S. Alnemri,  M. Ahmad,  D Nijhawan … (1997)
We report here the purification of the third protein factor, Apaf-3, that participates in caspase-3 activation in vitro. Apaf-3 was identified as a member of the caspase family, caspase-9. Caspase-9 and Apaf-1 bind to each other via their respective NH2-terminal CED-3 homologous domains in the presence of cytochrome c and dATP, an event that leads to caspase-9 activation. Activated caspase-9 in turn cleaves and activates caspase-3. Depletion of caspase-9 from S-100 extracts diminished caspase-3 activation. Mutation of the active site of caspase-9 attenuated the activation of caspase-3 and cellular apoptotic response in vivo, indicating that caspase-9 is the most upstream member of the apoptotic protease cascade that is triggered by cytochrome c and dATP.

Christopher D. Freel,  D Parrish,  Sally Kornbluth (2013)
Caspases are the primary drivers of apoptotic cell death, cleaving cellular proteins that are critical for dismantling the dying cell. Initially translated as inactive zymogenic precursors, caspases are activated in response to a variety of cell death stimuli. In addition to factors required for their direct activation (e.g., dimerizing adaptor proteins in the case of initiator caspases that lie at the apex of apoptotic signaling cascades), caspases are regulated by a variety of cellular factors in a myriad of physiological and pathological settings. For example, caspases may be modified posttranslationally (e.g., by phosphorylation or ubiquitylation) or through interaction of modulatory factors with either the zymogenic or active form of a caspase, altering its activation and/or activity. These regulatory events may inhibit or enhance enzymatic activity or may affect activity toward particular cellular substrates. Finally, there is emerging literature to suggest that caspases can participate in a variety of cellular processes unrelated to apoptotic cell death. In these settings, it is particularly important that caspases are maintained under stringent control to avoid inadvertent cell death. It is likely that continued examination of these processes will reveal new mechanisms of caspase regulation with implications well beyond control of apoptotic cell death.

Erich Nigg (1995)
Passage through the cell cycle requires the successive activation of different cyclin-dependent protein kinases (CDKs). These enzymes are controlled by transient associations with cyclin regulatory subunits, binding of inhibitory polypeptides and reversible phosphorylation reactions. To promote progression towards DNA replication, CDK/cyclin complexes phosphorylate proteins required for the activation of genes involved in DNA synthesis, as well as components of the DNA replication machinery. Subsequently, a different set of CDK/cyclin complexes triggers the phosphorylation of numerous proteins to promote the profound structural reorganizations that accompany the entry of cells into mitosis. At present, much research is focused on elucidating the links between CDK/cyclin complexes and signal transduction pathways controlling cell growth, differentiation and death. In future, a better understanding of the cell cycle machinery and its deregulation during oncogenesis may provide novel opportunities for the diagnostic and therapeutic management of cancer and other proliferation-related diseases.