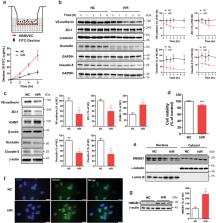 Hypoxia–reperfusion injury is one of the major risk factors for neurodegeneration. However, it is unclear whether ischaemic damage in brain microvascular endothelial cells plays roles in neurodegeneration, particularly in the amyloidogenic changes contributing to the development of Alzheimer’s disease (AD) pathologies. Therefore, we investigated the roles of hypoxia–reoxygenation (H/R)-induced release of high mobility group box protein 1 (HMGB1), a risk molecule for AD pathogenesis in the ischaemic damaged brain, from human brain microvascular endothelial cells (HBMVECs) in neuronal amyloid-beta (Aβ) production. H/R increased nuclear–cytosolic translocation and secretion of HMGB1 in HBMVECs, along with increased permeability and HMGB1-dependent p-c-Jun activation. In addition, H/R increased the expression of Sirtuin 1 (Sirt1), coincident with an increase of intracellular Sirt1–HMGB1 binding in HBMVECs. H/R increased the acetylation of HMGB1 and extracellular secretion, which was significantly inhibited by Sirt1 overexpression. Furthermore, Sirt1 contributed to autophagy-mediated endogenous HMGB1 degradation. More importantly, treatment of neuronal cells with conditioned medium from H/R-stimulated HBMVECs (H/R-CM) activated their amyloidogenic pathways. The neuronal amyloidogenic changes (i.e. increased levels of extracellular Aβ40 and Aβ42) by H/R-CM from HBMVECs were further increased by Sirt1 inhibition, which was significantly suppressed by neutralization of the HMGB1 in H/R-CM. Collectively, our results suggest that HMGB1 derived from H/R-stimulated HBMVECs contributes to amyloidogenic pathways in neurons playing roles in the pathogenesis of AD, which are regulated by endothelial Sirt1.

Alexander P. N. A. de Porto,  Anna Rubartelli,  Angela Bachi … (2003)
High Mobility Group 1 protein (HMGB1) is a chromatin component that, when leaked out by necrotic cells, triggers inflammation. HMGB1 can also be secreted by activated monocytes and macrophages, and functions as a late mediator of inflammation. Secretion of a nuclear protein requires a tightly controlled relocation program. We show here that in all cells HMGB1 shuttles actively between the nucleus and cytoplasm. Monocytes and macrophages acetylate HMGB1 extensively upon activation with lipopolysaccharide; moreover, forced hyperacetylation of HMGB1 in resting macrophages causes its relocalization to the cytosol. Cytosolic HMGB1 is then concentrated by default into secretory lysosomes, and secreted when monocytic cells receive an appropriate second signal.

Berislav Zlokovic,  Jimmy Bell (2009)
Vascular dysfunction has a critical role in Alzheimer's disease (AD). Recent data from brain imaging studies in humans and animal models suggest that cerebrovascular dysfunction may precede cognitive decline and onset of neurodegenerative changes in AD and AD models. Cerebral hypoperfusion and impaired amyloid beta-peptide (Abeta) clearance across the blood-brain barrier (BBB) may contribute to the onset and progression of dementia AD type. Decreased cerebral blood flow (CBF) negatively affects the synthesis of proteins required for memory and learning, and may eventually lead to neuritic injury and neuronal death. Impaired clearance of Abeta from the brain by the cells of the neurovascular unit may lead to its accumulation on blood vessels and in brain parenchyma. The accumulation of Abeta on the cerebral blood vessels, known as cerebral amyloid angiopathy (CAA), is associated with cognitive decline and is one of the hallmarks of AD pathology. CAA can severely disrupt the integrity of the blood vessel wall resulting in micro or macro intracerebral bleedings that exacerbates neurodegenerative process and inflammatory response and may lead to hemorrhagic stroke, respectively. Here, we review the role of the neurovascular unit and molecular mechanisms in vascular cells behind AD and CAA pathogenesis. First, we discuss apparent vascular changes, including the cerebral hypoperfusion and vascular degeneration that contribute to different stages of the disease process in AD individuals. We next discuss the role of the low-density lipoprotein receptor related protein-1 (LRP), a key Abeta clearance receptor at the BBB and along the cerebrovascular system, whose expression is suppressed early in AD. We also discuss how brain-derived apolipoprotein E isoforms may influence Abeta clearance across the BBB. We then review the role of two interacting transcription factors, myocardin and serum response factor, in cerebral vascular cells in controlling CBF responses and LRP-mediated Abeta clearance. Finally, we discuss the role of microglia and perivascular macrophages in Abeta clearance from the brain. The data reviewed here support an essential role of neurovascular and BBB mechanisms in contributing to both, onset and progression of AD.

The nuclear protein HMGB1 is secreted by monocytes via a non-classical, vesicle-mediated secretory pathway.

Lavinia Lotti,  Stefania Gardella,  M R Torrisi … (2002)
HMGB1, a non-histone nuclear factor, acts extracellularly as a mediator of delayed endotoxin lethality, which raises the question of how a nuclear protein can reach the extracellular space. We show that activation of monocytes results in the redistribution of HMGB1 from the nucleus to cytoplasmic organelles, which display ultrastructural features of endolysosomes. HMGB1 secretion is induced by stimuli triggering lysosome exocytosis. The early mediator of inflammation interleukin (IL)-1beta is also secreted by monocytes through a non-classical pathway involving exocytosis of secretory lysosomes. However, in keeping with their respective role of early and late inflammatory factors, IL-1beta and HMGB1 respond at different times to different stimuli: IL-1beta secretion is induced earlier by ATP, autocrinally released by monocytes soon after activation; HMGB1 secretion is triggered by lysophosphatidylcholine, generated later in the inflammation site. Thus, in monocytes, non-classical secretion can occur through vescicle compartments that are at least partially distinct.