Diversity of antibiotic-resistance genes in Canadian isolates of Aeromonas salmonicida subsp. salmonicida: dominance of pSN254b and discovery of pAsa8 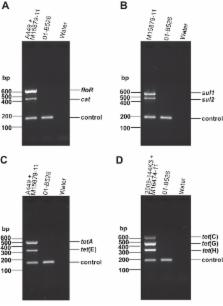 The bacterium Aeromonas salmonicida subsp. salmonicida is a common pathogen in fish farms worldwide. Since the antibiotic resistance of this bacterial species is on the increase, it is important to have a broader view on this issue. In the present study, we tested the presence of known plasmids conferring multi-drug resistance as well as antibiotic resistance genes by a PCR approach in 100 Canadian A. salmonicida subsp. salmonicida isolates. Our study highlighted the dominance of the conjugative pSN254b plasmid, which confers multi-drug resistance. We also identified a new multi-drug plasmid named pAsa8, which has been characterized by a combination of sequencing technologies (Illumina and Oxford nanopore). This new plasmid harbors a complex class 1 integron similar to the one of the Salmonella genomic island 1 (SGI1) found in Salmonella enterica and Proteus mirabilis. Consequently, in addition to providing an update on the A. salmonicida subsp. salmonicida isolates that are resistant to antibiotics, our data suggest that this bacterium is potentially an important reservoir of drug resistance genes and should consequently be monitored more extensively. In addition, we describe a screening method that has the potential to become a diagnostic tool that is complementary to other methods currently in use.

Marco Galardini,  Emanuele G. Biondi,  Marco Bazzicalupo … (2011)
Recent developments in sequencing technologies have given the opportunity to sequence many bacterial genomes with limited cost and labor, compared to previous techniques. However, a limiting step of genome sequencing is the finishing process, needed to infer the relative position of each contig and close sequencing gaps. An additional degree of complexity is given by bacterial species harboring more than one replicon, which are not contemplated by the currently available programs. The availability of a large number of bacterial genomes allows geneticists to use complete genomes (possibly from the same species) as templates for contigs mapping. Here we present CONTIGuator, a software tool for contigs mapping over a reference genome which allows the visualization of a map of contigs, underlining loss and/or gain of genetic elements and permitting to finish multipartite genomes. The functionality of CONTIGuator was tested using four genomes, demonstrating its improved performances compared to currently available programs. Our approach appears efficient, with a clear visualization, allowing the user to perform comparative structural genomics analysis on draft genomes. CONTIGuator is a Python script for Linux environments and can be used on normal desktop machines and can be downloaded from http://contiguator.sourceforge.net.

Teleost microbiomes: the state of the art in their characterization, manipulation and importance in aquaculture and fisheries

Martin Llewellyn,  Sébastien Boutin,  Seyed Hoseinifar … (2014)
Indigenous microbiota play a critical role in the lives of their vertebrate hosts. In human and mouse models it is increasingly clear that innate and adaptive immunity develop in close concert with the commensal microbiome. Furthermore, several aspects of digestion and nutrient metabolism are governed by intestinal microbiota. Research on teleosts has responded relatively slowly to the introduction of massively parallel sequencing procedures in microbiomics. Nonetheless, progress has been made in biotic and gnotobiotic zebrafish models, defining a core microbiome and describing its role in development. However, microbiome research in other teleost species, especially those important from an aquaculture perspective, has been relatively slow. In this review, we examine progress in teleost microbiome research to date. We discuss teleost microbiomes in health and disease, microbiome ontogeny, prospects for successful microbiome manipulation (especially in an aquaculture setting) and attempt to identify important future research themes. We predict an explosion in research in this sector in line with the increasing global demand for fish protein, and the need to find sustainable approaches to improve aquaculture yield. The reduced cost and increasing ease of next generation sequencing technologies provides the technological backing, and the next 10 years will be an exciting time for teleost microbiome research.

Timothy J. Welch,  W. Fricke,  Patrick McDermott … (2007)
Antimicrobial resistance in Yersinia pestis is rare, yet constitutes a significant international public health and biodefense threat. In 1995, the first multidrug resistant (MDR) isolate of Y. pestis (strain IP275) was identified, and was shown to contain a self-transmissible plasmid (pIP1202) that conferred resistance to many of the antimicrobials recommended for plague treatment and prophylaxis. Comparative analysis of the DNA sequence of Y. pestis plasmid pIP1202 revealed a near identical IncA/C plasmid backbone that is shared by MDR plasmids isolated from Salmonella enterica serotype Newport SL254 and the fish pathogen Yersinia ruckeri YR71. The high degree of sequence identity and gene synteny between the plasmid backbones suggests recent acquisition of these plasmids from a common ancestor. In addition, the Y. pestis pIP1202-like plasmid backbone was detected in numerous MDR enterobacterial pathogens isolated from retail meat samples collected between 2002 and 2005 in the United States. Plasmid-positive strains were isolated from beef, chicken, turkey and pork, and were found in samples from the following states: California, Colorado, Connecticut, Georgia, Maryland, Minnesota, New Mexico, New York and Oregon. Our studies reveal that this common plasmid backbone is broadly disseminated among MDR zoonotic pathogens associated with agriculture. This reservoir of mobile resistance determinants has the potential to disseminate to Y. pestis and other human and zoonotic bacterial pathogens and therefore represents a significant public health concern.