Nephrotic syndrome and kidney failure due to immunocomplex-mediated renal damage in a patient with Waldenström's Macroglobulinemia: a case report 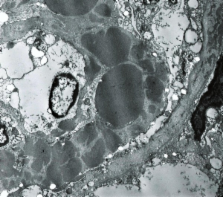 Unlike the quite frequent renal involvement seen in cases of Multiple Myeloma, the kidney is hardly ever compromised in patients with Waldenström's Macroglobulinemia. Nephrotic range proteinuria is a very unusual manifestation of renal injury in these patients and when present it is due to amyloid light-chain deposition most of the times.

A 60-year-old male patient presented to the hospital with nephrotic syndrome, renal insufficiency, hypertension and lymphadenopathy. The investigations led to the diagnosis of Waldenström's Macroglobulinemia with associated nephrotic syndrome and chronic kidney disease due to an unusual form of hypocomplementemic glomerulopathy with histopathological features similar to those seen in mesangiocapillary glomerulonephritis type III, but lacking proliferative changes.

We present an unusual case of immunologically-mediated renal damage in a patient with Waldenström's Macroglobulinemia, leading to non-amyloid nephrotic syndrome and chronic renal insufficiency.

Christopher G. Owen,  J F S Miguel,  Rafael Benevenuto … (2003)
This presentation represents consensus recommendations for the clinicopathological definition of Waldenstrom's macroglobulinemia (WM), which were prepared in conjunction with the Second International Workshop held in Athens, Greece during September 2002. WM is an uncommon lymphoproliferative disorder characterized primarily by bone marrow infiltration and IgM monoclonal gammopathy. It should be considered a distinct clinicopathological entity rather than a clinical syndrome secondary to IgM secretion. The underlying pathological diagnosis in WM is lymphoplasmacytic lymphoma as defined by the World Health Organization (WHO) and Revised European-American Lymphoma (REAL) classification criteria. The concentration of monoclonal IgM can vary widely in WM and it is not possible to define a concentration that reliably distinguishes WM from monoclonal gammopathy of undetermined significance (MGUS) and other lymphoproliferative disorders. A diagnosis of WM can therefore be made irrespective of IgM concentration if there is evidence on a bone marrow trephine biopsy of bone marrow infiltration by lymphoplasmacytic lymphoma with predominantly an intertrabecular pattern, supported by appropriate immunophenotypic studies. Simple criteria to distinguish patients with symptomatic WM who require therapy from those with asymptomatic WM and MGUS were also proposed. Patients with clinical features attributable to IgM monoclonal gammopathy but no overt evidence of lymphoma are considered to constitute a distinct clinical group and the term "IgM-related disorders" is proposed. Copyright 2003 Elsevier Inc. All rights reserved.

M A Gertz,  Arun Vijay (2007)
In the past 36 months, new developments have occurred both in the understanding of the biology of Waldenström macroglobulinemia (WM) and in therapeutic options for WM. Here, we review the classification, clinical features, and diagnostic criteria of the disease. WM is a B-cell neoplasm characterized by lymphoplasmacytic infiltration of the bone marrow and a monoclonal immunoglobulin M (IgM) protein. The symptoms of WM are attributable to the extent of tumor infiltration and to elevated IgM levels. The most common symptom is fatigue attributable to anemia. The prognostic factors predictive of survival include the patient's age, beta(2)-microglobulin level, monoclonal protein level, hemoglobin concentration, and platelet count. Therapy is postponed for asymptomatic patients, and progressive anemia is the most common indication for initiation of treatment. The main therapeutic options include alkylating agents, nucleoside analogues, and rituximab. Studies involving combination chemotherapy are ongoing, and preliminary results are encouraging. No specific agent or regimen has been shown to be superior to another for treatment of WM. Novel agents such as bortezomib, perifosine, atacicept, oblimersen sodium, and tositumomab show promise as rational targeted therapy for WM.

The World Health Organization classification of neoplasms of the hematopoietic and lymphoid tissues: report of the Clinical Advisory Committee meeting--Airlie House, Virginia, November, 1997.

H. Müller,  A. Lister,  Andrew E Jaffe … (1999)
Since 1995, the European Association of Pathologists and the Society for Hematopathology have been developing a new World Health Organization (WHO) classification of hematologic malignancies. The classification includes lymphoid, myeloid, histiocytic, and mast cell neoplasms. The WHO project involves ten committees of pathologists, who have developed lists and definitions of disease entities. A Clinical Advisory Committee (CAC) of international hematologists and oncologists was formed to ensure that the classification will be useful to clinicians. A meeting was held in November 1997 to discuss clinical issues related to the classification. WHO has adopted the 'Revised European-American Classification of Lymphoid Neoplasms' (REAL), published in 1994 by the International Lymphoma Study Group (ILSG), as the classification of lymphoid neoplasms. This approach to classification is based on the principle that a classification is a list of 'real' disease entities, which are defined by a combination of morphology, immunophenotype, genetic features, and clinical features. The relative importance of each of these features varies among diseases, and there is no one 'gold standard'. The WHO classification has applied the principles of the REAL classification to myeloid and histiocytic neoplasms. The classification of myeloid neoplasms recognizes distinct entities defined by a combination of morphology and cytogenetic abnormalities. The CAC meeting, which was organized around a series of clinical questions, was able to reach a consensus on most of the questions posed. The questions and the consensus are discussed in detail below. Among other things, the CAC concluded that clinical groupings of lymphoid neoplasms were neither necessary nor desirable. Patient treatment is determined by the specific type of lymphoma, with the addition of grade within the tumor type, if applicable, and clinical prognostic factors such as the international prognostic index (IPI). The experience of developing the WHO classification has produced a new and exciting degree of cooperation and communication between oncologists and pathologists from around the world, which should facilitate progress in the understanding and treatment of hematologic malignancies.