Management of Pregnancy with Klippel-Trenaunay-Weber Syndrome: A Case Report and Review 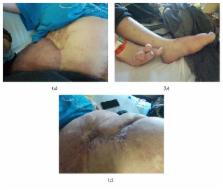 Klippel-Trenaunay-Weber syndrome is a rare neurocutaneous syndrome with vascular involvement. Given the rarity of the syndrome, its management in pregnancy is based on the outcome of a few case reports and expert opinion.

The management of a complicated case with its antepartum, intrapartum, and postpartum concerns has been addressed in this review.

Prenatal consults with anesthesia, general surgery, intervention radiology, and internal medicine should be arranged, prior to delivery in anticipation of all the possible complications. Apart from the pregnancy management, preconceptional counselling including the genetics, prognosis, and contraception has an important role in patient management.

The etiology of the Klippel-Trenaunay syndrome.

A Baskerville, S A Ackroyd-Stolarz, N L Browse (1985)
The etiology of the Klippel-Trenaunay syndrome (KTS) remains obscure. Although venous hypertension secondary to deep venous obstruction has been suggested as a cause, recent studies have demonstrated that most patients have unimpeded venous drainage. Calf blood flows have been measured in 33 patients with KTS using venous occlusion plethysmography. Although all flow rates were within normal limits, flow in affected limbs was invariably greater than in normal limbs (p less than 0.001), and this is related to the presence of the nevus. Biopsies of subcutaneous veins demonstrate the histological features of a response to chronically raised flow. The authors suggest that KTS is caused by mesodermal abnormality during fetal development, leading to the maintenance of microscopic arteriovenous communications in the limb bud, as a result of which the triad of nevus, hypertrophy, and superficial varices is produced. Deep venous abnormalities occur pari passu with the triad and are not responsible for its development.

THE KLIPPEL-TRENAUNAY SYNDROME: VARICOSITY, HYPERTROPHY AND HEMANGIOMA WITH NO ARTERIOVENOUS FISTULA.

The laryngeal mask airway is effective (and probably safe) in selected healthy parturients for elective Cesarean section: a prospective study of 1067 cases.

J Brimacombe, H. Yang, Ju Ah Lee … (2001)
To report on the use of the laryngeal mask airway (LMA) for elective Cesarean section in 1067 consecutive ASA I-II patients preferring general anesthesia. Patients were excluded if they had pharyngeal reflux, a pre-pregnancy body mass index >30, or had a known/predicted difficult airway. Patients were fasted for six hours and given ranitidine/sodium citrate. A rapid sequence induction was performed with thiopentone and suxamethonium. The LMA was inserted by experienced users. Anesthesia was maintained with N(2)O and 50% O(2) and a volatile agent. Cricoid pressure was maintained until delivery, but was relaxed if insertion/ventilation was difficult. Patients were intubated if an effective airway was not obtained within 90 sec, or SpO(2) 45 mmHg. Postdelivery, vecuronium and fentanyl were administered. An effective airway was obtained in 1060 (99%) patients, 1051 (98%) at the first attempt and nine (1%) at the second or third attempt. Air leakage or partial airway obstruction occurred in 22 (21%) patients, and seven (0.7%) patients required intubation. There were no episodes of hypoxia (SpO(2) /=7 after five minutes. We conclude that the LMA is effective and probably safe for elective Cesarean section in healthy, selected patients when managed by experienced LMA users.