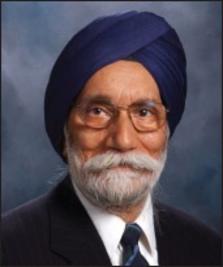 ScienceOpenPublisherPMC
Bookmark
There is no author summary for this article yet. Authors can add summaries to their articles on ScienceOpen to make them more accessible to a non-specialist audience.
Professor Sohan Singh Hayreh MD, MS (Punjab), PhD (London), DSc (London), FRCS (England & Edinburgh), FRCOphth (Hon). Professor Sohan Singh Hayreh is a clinical scientist, and has made multifaceted, exhaustive ophthalmic research contributions in the most important blinding disorders since 1955. He was born on November 6, 1927 in a small village in the Punjab. He joined the King Edward Medical College in Lahore and after partition of India, moved to Amritsar Medical College. He got his M.B., B.S. and Master of Surgery degrees from the Panjab University. He was a house surgeon with the Professor of Surgery at Amritsar and then served in the Indian Army Medical Corps. Since he was primarily interested in research and academic career, he left the army and joined the Anatomy department of the newly opened Government Medical College Patiala in 1955. At Patiala, he did extensive studies on the anatomy of the vasculature of the eye, optic nerve and orbit; those studies, published in the British Journal of Ophthalmology, have been the classic on those topics. He was the first Indian to be selected for Beit Memorial Research Fellowship in Medical Sciences, the highly-coveted research fellowship in medical sciences in the United Kingdom (so far 6 of the former Beit fellows have gone on to win Nobel Prize in Medicine). He worked at the University of London, as a Beit Memorial Research Fellow for 3 years with the international legend Sir Stewart Duke-Elder. That research work formed his thesis for Ph.D. from the University of London. After that, he joined as Lecturer in Clinical Ophthalmology at the University of London. He obtained Fellowships of the Royal College of Surgeons of Edinburgh and of the Royal College of Surgeons of England. In 1969 he was selected as the Senior Lecturer of Ophthalmology at the University of Edinburgh (Scotland) and Consultant Ophthalmologist at the Edinburgh Royal Infirmary; he was later appointed as the first Reader in Ophthalmology by the University of Edinburgh. There he met his Scottish scholarly wife. In 1973 he was invited by the University of Iowa, USA as Professor of Ophthalmology and Director of Ocular Vascular Research. He has worked in that Department ever since. In 1999 he assumed an emeritus Professor of Ophthalmology status at the University of Iowa; since then, he has devoted himself fulltime to his research and one day a week sees referred patients in his specialties not only from North America but also from all over the world, him being the international authority in his field. Professor Hayreh, as a clinical scientist, has been actively engaged in basic, experimental and clinical ophthalmic research during the more than 60 years. In spite of the fact that he is now 90 years old, he is still active in his research and publishing. He has made significant, pioneering scientific seminal contributions in ocular vascular occlusive disorders, glaucoma and optic nerve disorders, which collectively constitute the most common cause of visual loss or impairment. His research has changed basic concepts about these diseases and their management. He has published, so far, more than 400 original peer-reviewed articles in various international ophthalmic journals, 6 classical monographs and books in his field of research, and more than 50 chapters in ophthalmic books. In 1987, the University of London, in recognition of his research as “original and seminal in nature”, awarded him its highest and most prestigious degree of Doctor of Science in Medicine (He was the first ophthalmologist to be awarded that). In 2009 the Royal College of Ophthalmologists conferred on him their Honorary Fellowship, their highest honor, for his contributions to ophthalmology. In addition to those, since 1963, he has received many international honors, awards and named lectureships, including those from the Royal College of Surgeons of England, the Royal College of Physicians of Edinburgh (Scotland), the Royal College of Ophthalmologists, the Ophthalmological Society of the United Kingdom, the British Medical Association, the University of Glasgow (Scotland), the International Society for Eye Research, the Association of Research in Vision and Ophthalmology and the Macula Society. He has been the Guest of Honor of the American Academy of Ophthalmology, and has been invited keynote speaker by the national ophthalmic societies of Germany, Spain, Japan, Argentina, Brazil, Turkey, and the Royal College of Ophthalmologists in Britain. He has delivered over 80 invited lectures at various international meetings throughout the world. Professor Hayreh is a member of some 25 national and international prestigious ophthalmic societies. Sheer grit, unwavering determination, burning desire and pure passion seem to have paved the way to Professor Hayreh's steady and purposeful ascent in his professional career spanning three continents. The story of his life is a shining example for an adventurous young ophthalmologist to try and emulate. Success does seem to come in abundant measures to one who dreams big, works hard, keeps hope alive, and never loses an opportunity to excel. We are very proud to feature Professor Hayreh as part of the Living Legends Series of Indian Journal of Ophthalmology.