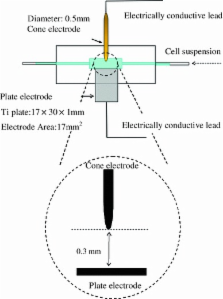 Xiue Wang,  Y. Huang,  Bernhard Becker … (1995)
Electrorotation measurements were used to demonstrate that the dielectric properties of the metastatic human breast cancer cell line MDA231 were significantly different from those of erythrocytes and T lymphocytes. These dielectric differences were exploited to separate the cancer cells from normal blood cells by appropriately balancing the hydrodynamic and dielectrophoretic forces acting on the cells within a dielectric affinity column containing a microelectrode array. The operational criteria for successful particle separation in such a column are analyzed and our findings indicate that the dielectric affinity technique may prove useful in a wide variety of cell separation and characterization applications.

Gerard Markx,  Mark Talary,  Ronald Pethig (1994)
Dielectrophoresis, the movement of particles in non-uniform AC electric fields, was used to rapidly separate viable and non-viable yeast cells with good efficiency. Known mixtures of viable and heat-treated cells of Saccharomyces cerevisiae were separated and selectively isolated using positive and negative dielectrophoretic forces generated by microelectrodes in a small chamber. Good correlations with the initial known relative compositions were obtained by direct microscopic counting of cells at the electrodes after initial dielectrophoretic separation (r = 0.995), from methylene blue staining (r = 0.992) and by optical absorption measurements (r = 0.980) of the effluent after selectively flushing out the viable and non-viable cells from the chamber. Through measurement of cell viability by staining with methylene blue and plate counts, for an initial suspension of approx. 1.4 x 10(7) cells per ml containing 60% non-viable cells, the dielectrophoretically separated non-viable fraction contained 3% viable cells and the viable fraction 8% dead cells. The separation efficiency is increased by dilution of the initial suspension or by repeat operation(s). Cell viability was not affected by the separation procedure.

K.V. Kaler,  T.B. Jones (1990)
In this paper we have utilized the principle of dielectrophoresis (DEP) to develop an apparatus to stably levitate single biological cells using a digital feedback control scheme. Using this apparatus, the positive DEP spectra of both Canola plant protoplast and ligament fibroblast cells have been measured over a wide range of frequencies (1 kHz to 50 MHz) and suspending medium conductivities (11-800 muS/cm). The experimental data thus obtained have been interpreted in terms of a simple spherical cell model. Furthermore, utilizing such a model, we have shown that various cellular parameters of interest can be readily obtained from the measured DEP levitation spectrum. Specifically, the effective membrane capacitance of single cells has been determined. Values of 0.47 +/- 0.03 muF/cm2 for Canola protoplasts and 1.52 +/- 0.26 muF/cm2 for ligament fibroblasts thus obtained are consistent with those determined by other existing electrical methods.