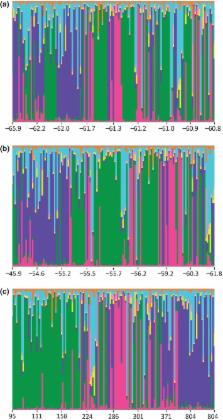 Determining whether comparable processes drive genetic divergence among marine species is relevant to molecular ecologists and managers alike. Sympatric species with similar life histories might be expected to show comparable patterns of genetic differentiation and a consistent influence of environmental factors in shaping divergence. We used microsatellite loci to quantify genetic differentiation across the Scotia Arc in three species of closely related benthic octopods, Pareledone turqueti, P. charcoti, and Adelieledone polymorpha. The relative importance of environmental factors (latitude, longitude, depth, and temperature) in shaping genetic structure was investigated when significant spatial genetic structure was uncovered. Isolated populations of P. turqueti and A. polymorpha at these species’ range margins were genetically different to samples close to mainland Antarctica; however, these species showed different genetic structures at a regional scale. Samples of P. turqueti from the Antarctic Peninsula, Elephant Island, and Signy Island were genetically different, and this divergence was associated primarily with sample collection depth. By contrast, weak or nonsignificant spatial genetic structure was evident across the Antarctic Peninsula, Elephant Island, and Signy Island region for A. polymorpha, and slight associations between population divergence and temperature or depth (and/or longitude) were detected. Pareledone charcoti has a limited geographic range, but exhibited no genetic differentiation between samples from a small region of the Scotia Arc (Elephant Island and the Antarctic Peninsula). Thus, closely related species with similar life history strategies can display contrasting patterns of genetic differentiation depending on spatial scale; moreover, depth may drive genetic divergence in Southern Ocean benthos.

The genetical structure of populations.