Experiences of Autism Acceptance and Mental Health in Autistic Adults 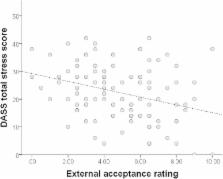 The Measurement of Observer Agreement for Categorical Data

The short-form version of the Depression Anxiety Stress Scales (DASS-21): construct validity and normative data in a large non-clinical sample.

Sigrid R Crawford,  Michael Henry (2005)
To test the construct validity of the short-form version of the Depression anxiety and stress scale (DASS-21), and in particular, to assess whether stress as indexed by this measure is synonymous with negative affectivity (NA) or whether it represents a related, but distinct, construct. To provide normative data for the general adult population. Cross-sectional, correlational and confirmatory factor analysis (CFA). The DASS-21 was administered to a non-clinical sample, broadly representative of the general adult UK population (N = 1,794). Competing models of the latent structure of the DASS-21 were evaluated using CFA. The model with optimal fit (RCFI = 0.94) had a quadripartite structure, and consisted of a general factor of psychological distress plus orthogonal specific factors of depression, anxiety, and stress. This model was a significantly better fit than a competing model that tested the possibility that the Stress scale simply measures NA. The DASS-21 subscales can validly be used to measure the dimensions of depression, anxiety, and stress. However, each of these subscales also taps a more general dimension of psychological distress or NA. The utility of the measure is enhanced by the provision of normative data based on a large sample.