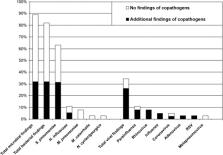 The microbial etiology of community-acquired pneumonia (CAP) is still not well characterized. During the past few years, polymerase chain reaction (PCR)-based methods have been developed for many pathogens causing respiratory tract infections. The aim of this study was to determine the etiology of CAP among adults—especially the occurrence of mixed infections among patients with CAP—by implementing a new diagnostic PCR platform combined with conventional methods.

A microbial etiology could be identified for 67% of the patients ( n = 124). For patients with complete sampling, a microbiological agent was identified for 89% of the cases. The most frequently detected pathogens were S. pneumoniae (70 patients [ 38]) and respiratory virus (53 patients [ 29]). Two or more pathogens were present in 43 (35%) of 124 cases with a determined etiology.

By supplementing traditional diagnostic methods with new PCR-based methods, a high microbial yield was achieved. This was especially evident for patients with complete sampling. Mixed infections were frequent (most commonly S. pneumoniae together with a respiratory virus).

Incidence and characteristics of viral community-acquired pneumonia in adults.

L. Jennings, T. Anderson, K. A. Beynon … (2008)
In adults, viral causes of community-acquired pneumonia (CAP) are poorly characterised. The aims of this study were to characterise the viral aetiology of CAP in adults by using an extensive array of viral diagnostic tests and to compare the characteristics of viral pneumonia with those of pneumococcal pneumonia. Adults admitted to Christchurch Hospital over a 1-year period with CAP were included in the study. Microbiological testing methods included blood and sputum cultures, urinary antigen testing for Streptococcus pneumoniae and Legionella pneumophila, antibody detection in paired sera and detection of respiratory viruses in nasopharyngeal swabs by immunofluorescence, culture and PCR. Of 304 patients with CAP, a viral diagnosis was made in 88 (29%), with rhinoviruses and influenza A being the most common. Two or more pathogens were detected in 49 (16%) patients, 45 of whom had mixed viral and bacterial infections. There were no reliable clinical predictors of viral pneumonia, although several variables were independently associated with some aetiologies. The presence of myalgia was associated with pneumonia caused by any respiratory virus (OR 3.62, 95% CI 1.29 to 10.12) and influenza pneumonia (OR 190.72, 95% CI 3.68 to 9891.91). Mixed rhinovirus/pneumococcal infection was associated with severe disease. Virus-associated CAP is common in adults. Polymicrobial infections involving bacterial and viral pathogens are frequent and may be associated with severe pneumonia.

Rapid and sensitive method using multiplex real-time PCR for diagnosis of infections by influenza a and influenza B viruses, respiratory syncytial virus, and parainfluenza viruses 1, 2, 3, and 4.

Kate E. Templeton, Sitha Scheltinga, Matthias Beersma … (2004)
Laboratory diagnosis of viral respiratory infections is generally performed by virus isolation in cell culture and immunofluorescent assays. Reverse transcriptase PCR is now recognized as a sensitive and specific alternative for detection of respiratory RNA viruses. A rapid real-time multiplex PCR assay was developed for the detection of influenza A and influenza B viruses, human respiratory syncytial virus (RSV), parainfluenza virus 1 (PIV1), PIV2, PIV3, and PIV4 in a two-tube multiplex reaction which used molecular beacons to discriminate the pathogens. A total of 358 respiratory samples taken over a 1-year period were analyzed by the multiplex assay. The incidence of respiratory viruses detected in these samples was 67 of 358 (19%) and 87 of 358 (24%) by culture and real-time PCR, respectively. Culture detected 3 influenza A virus, 2 influenza B virus, 57 RSV, 2 PIV1, and 2 PIV3 infections. All of these culture-positive samples and an additional 5 influenza A virus, 6 RSV, 2 PIV1, 1 PIV2, 1 PIV3, and 3 PIV4 infections were detected by the multiplex real-time PCR. The application of real-time PCR to clinical samples increases the sensitivity for respiratory viral diagnosis. In addition, results can be obtained within 6 h, which increases clinical relevance. Therefore, use of this real-time PCR assay would improve patient management and infection control.