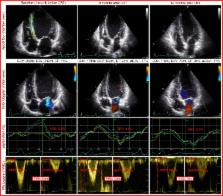 Echocardiography is used in cardiac resynchronisation therapy (CRT) to assess cardiac function, and in particular left ventricular (LV) volumetric status, and prediction of response. Despite its widespread applicability, LV volumes determined by echocardiography have inherent measurement errors, interobserver and intraobserver variability, and discrepancies with the gold standard magnetic resonance imaging. Echocardiographic predictors of CRT response are based on mechanical dyssynchrony. However, parameters are mainly tested in single-centre studies or lack feasibility. Speckle tracking echocardiography can guide LV lead placement, improving volumetric response and clinical outcome by guiding lead positioning towards the latest contracting segment. Results on optimisation of CRT device settings using echocardiographic indices have so far been rather disappointing, as results suffer from noise. Defining response by echocardiography seems valid, although re-assessment after 6 months is advisable, as patients can show both continuous improvement as well as deterioration after the initial response. Three-dimensional echocardiography is interesting for future implications, as it can determine volume, dyssynchrony and viability in a single recording, although image quality needs to be adequate. Deformation patterns from the septum and the derived parameters are promising, although validation in a multicentre trial is required. We conclude that echocardiography has a pivotal role in CRT, although clinicians should know its shortcomings.

Fakhar Z Khan, Mumohan Virdee, Christopher Palmer … (2012)
This study sought to assess the impact of targeted left ventricular (LV) lead placement on outcomes of cardiac resynchronization therapy (CRT). Placement of the LV lead to the latest sites of contraction and away from the scar confers the best response to CRT. We conducted a randomized, controlled trial to compare a targeted approach to LV lead placement with usual care. A total of 220 patients scheduled for CRT underwent baseline echocardiographic speckle-tracking 2-dimensional radial strain imaging and were then randomized 1:1 into 2 groups. In group 1 (TARGET [Targeted Left Ventricular Lead Placement to Guide Cardiac Resynchronization Therapy]), the LV lead was positioned at the latest site of peak contraction with an amplitude of >10% to signify freedom from scar. In group 2 (control) patients underwent standard unguided CRT. Patients were classified by the relationship of the LV lead to the optimal site as concordant (at optimal site), adjacent (within 1 segment), or remote (≥2 segments away). The primary endpoint was a ≥15% reduction in LV end-systolic volume at 6 months. Secondary endpoints were clinical response (≥1 improvement in New York Heart Association functional class), all-cause mortality, and combined all-cause mortality and heart failure-related hospitalization. The groups were balanced at randomization. In the TARGET group, there was a greater proportion of responders at 6 months (70% vs. 55%, p = 0.031), giving an absolute difference in the primary endpoint of 15% (95% confidence interval: 2% to 28%). Compared with controls, TARGET patients had a higher clinical response (83% vs. 65%, p = 0.003) and lower rates of the combined endpoint (log-rank test, p = 0.031). Compared with standard CRT treatment, the use of speckle-tracking echocardiography to the target LV lead placement yields significantly improved response and clinical status and lower rates of combined death and heart failure-related hospitalization. (Targeted Left Ventricular Lead Placement to Guide Cardiac Resynchronization Therapy [TARGET] study); ISRCTN19717943). Copyright © 2012 American College of Cardiology Foundation. Published by Elsevier Inc. All rights reserved.

John Cleland, William T. Abraham, Cecilia Linde … (2013)
Aims Cardiac resynchronization therapy (CRT) with or without a defibrillator reduces morbidity and mortality in selected patients with heart failure (HF) but response can be variable. We sought to identify pre-implantation variables that predict the response to CRT in a meta-analysis using individual patient-data. Methods and results An individual patient meta-analysis of five randomized trials, funded by Medtronic, comparing CRT either with no active device or with a defibrillator was conducted, including the following baseline variables: age, sex, New York Heart Association class, aetiology, QRS morphology, QRS duration, left ventricular ejection fraction (LVEF), and systolic blood pressure. Outcomes were all-cause mortality and first hospitalization for HF or death. Of 3782 patients in sinus rhythm, median (inter-quartile range) age was 66 (58–73) years, QRS duration was 160 (146–176) ms, LVEF was 24 (20–28)%, and 78% had left bundle branch block. A multivariable model suggested that only QRS duration predicted the magnitude of the effect of CRT on outcomes. Further analysis produced estimated hazard ratios for the effect of CRT on all-cause mortality and on the composite of first hospitalization for HF or death that suggested increasing benefit with increasing QRS duration, the 95% confidence bounds excluding 1.0 at ∼140 ms for each endpoint, suggesting a high probability of substantial benefit from CRT when QRS duration exceeds this value. Conclusion QRS duration is a powerful predictor of the effects of CRT on morbidity and mortality in patients with symptomatic HF and left ventricular systolic dysfunction who are in sinus rhythm. QRS morphology did not provide additional information about clinical response. ClinicalTrials.gov numbers NCT00170300, NCT00271154, NCT00251251.

Insights from a cardiac resynchronization optimization clinic as part of a heart failure disease management program.

Wilfried Mullens, Richard A. Grimm, Tanya Verga … (2009)
Our aim was to determine the feasibility and value of a protocol-driven approach to patients with cardiac resynchronization therapy (CRT) who did not exhibit a positive response long after implant. Up to one-third of patients with advanced heart failure do not exhibit a positive response to CRT. A total of 75 consecutive ambulatory patients with persistent advanced heart failure symptoms and/or adverse reverse remodeling and CRT implanted >6 months underwent a comprehensive protocol-driven evaluation to determine the potential reasons for a suboptimal response. Recommendations were made to maximize the potential of CRT, and adverse events were documented. All patients (mean left ventricular [LV] ejection fraction 23 +/- 9%, LV end-diastolic volume 275 +/- 127 ml) underwent evaluation. Eighty-eight percent of patients had significantly better echocardiographic indexes of LV filling and LV ejection with optimal setting of their CRT compared with a temporary VVI back-up setting. Most patients had identifiable reasons for suboptimal response, including inadequate device settings (47%), suboptimal medical treatment (32%), arrhythmias (32%), inappropriate lead position (21%), or lack of baseline dyssynchrony (9%). Multidisciplinary recommendations led to changes in device settings and/or other therapy modifications in 74% of patients and were associated with fewer adverse events (13% vs. 50%, odds ratio: 0.2 [95% confidence interval: 0.07 to 0.56], p = 0.002) compared with those in which no recommendation could be made. Routine protocol-driven approach to evaluate ambulatory CRT patients who did not exhibit a positive response is feasible, and changes in device settings and/or other therapies after multidisciplinary evaluation may be associated with fewer adverse events.