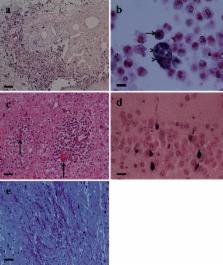 Bacterial meningitis is a devastating disease occurring worldwide with up to half of the survivors left with permanent neurological sequelae. Due to intrinsic properties of the meningeal pathogens and the host responses they induce, infection can cause relatively specific lesions and clinical syndromes that result from interference with the function of the affected nervous system tissue. Pathogenesis is based on complex host–pathogen interactions, some of which are specific for certain bacteria, whereas others are shared among different pathogens. In this review, we summarize the recent progress made in understanding the molecular and cellular events involved in these interactions. We focus on selected major pathogens, Streptococcus pneumonia, S. agalactiae (Group B Streptococcus), Neisseria meningitidis, and Escherichia coli K1, and also include a neglected zoonotic pathogen, Streptococcus suis. These neuroinvasive pathogens represent common themes of host–pathogen interactions, such as colonization and invasion of mucosal barriers, survival in the blood stream, entry into the central nervous system by translocation of the blood–brain and blood–cerebrospinal fluid barrier, and induction of meningeal inflammation, affecting pia mater, the arachnoid and subarachnoid spaces.

Walter Taylor,  Ho Dang Trung Nghia,  Constance Schultsz … (2009)
Streptococcus suis infection is acquired through exposure to contaminated pigs or pig meat. Over the past few years, the number of reported S. suis infections in humans has increased significantly, with most cases originating in Southeast Asia, where there is a high density of pigs. Increased awareness, improved diagnostics, and the occurrence of outbreaks have contributed to this increase. Meningitis and sepsis are the most common clinical manifestations of S. suis infection; hearing loss is a frequent complication. In this article, we provide an overview of the emergence and clinical manifestations of S. suis infection.

Virulence factors involved in the pathogenesis of the infection caused by the swine pathogen and zoonotic agent Streptococcus suis.

Daniel Grenier,  Mariela Segura,  Marcelo Gottschalk … (2012)
Streptococcus suis is a major swine pathogen responsible for important economic losses to the swine industry worldwide. It is also an emerging zoonotic agent of meningitis and streptococcal toxic shock-like syndrome. Since the recent recognition of the high prevalence of S. suis human disease in southeast and east Asia, the interest of the scientific community in this pathogen has significantly increased. In the last few years, as a direct consequence of these intensified research efforts, large amounts of data on putative virulence factors have appeared in the literature. Although the presence of some proposed virulence factors does not necessarily define a S. suis strain as being virulent, several cell-associated or secreted factors are clearly important for the pathogenesis of the S. suis infection. In order to cause disease, S. suis must colonize the host, breach epithelial barriers, reach and survive in the bloodstream, invade different organs, and cause exaggerated inflammation. In this review, we discuss the potential contribution of different described S. suis virulence factors at each step of the pathogenesis of the infection. Finally, we briefly discuss other described virulence factors, virulence factor candidates and virulence markers for which a precise role at specific steps of the pathogenesis of the S. suis infection has not yet been clearly established.