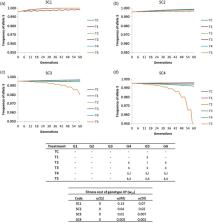 The sustainable control of the Mediterranean fruit fly, Ceratitis capitata (Wiedemann), is compromised by the development of resistance to malathion and lambda‐cyhalothrin in Spanish field populations. At present, field populations remain susceptible to spinosad. However, the resistant strain JW‐100s has been obtained under laboratory selection with spinosad, and resistance has been associated with the presence of different mutations causing truncated transcripts of the α6 subunit of the nicotinic acetylcholine receptor (nAChRα6).

An F1 screen assay followed by the molecular characterization of surviving flies has been used to search for spinosad‐resistant alleles in field populations. Two different resistant alleles giving rise to truncated isoforms of Ccα6 have been identified, which corresponds to an estimated allelic frequency of at least 0.0023–0.0046. The fitness values of the resistant nAChRα6 alleles found in the laboratory strain JW‐100s were estimated to be 0.4 for RR and 0.2 for SR. Mathematical modelling predicted that spinosad‐resistant alleles will rapidly decline over time in field populations if their fitness cost was the same as estimated for laboratory‐resistant alleles. However, they are predicted to increase in the field if their fitness cost is lower and resistance management strategies are not implemented.

Spinosad‐resistant alleles have been detected in field populations for the first time. Our modelling simulations indicate that the best option to delay the appearance of spinosad resistance would be its rotation with other insecticides without cross‐resistance. The integrated F1 screen/molecular genetic analysis presented here can be used for future monitoring studies. © 2020 The Authors. Pest Management Science published by John Wiley & Sons Ltd on behalf of Society of Chemical Industry.

Spinosad‐resistant alleles have been found in field populations of Ceratitis capitata for the first time. Evolutionary modelling predicted that resistance management strategies will delay the evolution of resistance. 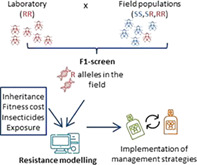 Thomas C Sparks,  Ralf Nauen (2015)
Insecticide resistance is a long standing and expanding problem for pest arthropod control. Effective insecticide resistance management (IRM) is essential if the utility of current and future insecticides is to be preserved. Established in 1984, the Insecticide Resistance Action Committee (IRAC) is an international association of crop protection companies. IRAC serves as the Specialist Technical Group within CropLife International focused on ensuring the long term efficacy of insect, mite and tick control products through effective resistance management for sustainable agriculture and improved public health. A key function of IRAC is the continued development of the Mode of Action (MoA) classification scheme, which provides up-to-date information on the modes of action of new and established insecticides and acaricides and which serves as the basis for developing appropriate IRM strategies for crop protection and vector control. The IRAC MoA classification scheme covers more than 25 different modes of action and at least 55 different chemical classes. Diversity is the spice of resistance management by chemical means and thus it provides an approach to IRM providing a straightforward means to identify potential rotation/alternation options.

The biology of insecticidal activity and resistance.

Trent Perry,  Philip Batterham,  Phillip J. Daborn (2011)
Identifying insecticide resistance mechanisms is paramount for pest insect control, as the understandings that underpin insect control strategies must provide ways of detecting and managing resistance. Insecticide resistance studies rely heavily on detailed biochemical and genetic analyses. Although there have been many successes, there are also many examples of resistance that still challenge us. As a precursor to rational pest insect control, the biology of the insect, within the contexts of insecticide modes of action and insecticide metabolism, must be well understood. It makes sense to initiate this research in the best model insect system, Drosophila melanogaster, and translate these findings and methodologies to other insects. Here we explore the usefulness of the D. melanogaster model in studying metabolic-based insecticide resistances, target-site mediated resistances and identifying novel insecticide targets, whilst highlighting the importance of having a more complete understanding of insect biology for insecticide studies. Copyright © 2011 Elsevier Ltd. All rights reserved.