Overview of Neurotrauma and Sensory Loss 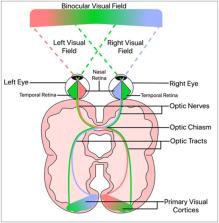 Neurotrauma can cause devastating outcomes for patients both from primary as well as secondary injury. Sensory loss following neurotrauma is often overlooked and undermanaged. To gain awareness about this important topic, we highlight key findings of visual, hearing, taste, and smell disturbances that can occur after injury. The pathways are highlighted as well as significant pathophysiology. Both primary disruption as well as secondary disruptions from ongoing inflammation are addressed. The figures are designed to be user friendly guides for the clinician to help manage these patients. In the final section, we address key management strategies and approaches. The strategies deal with multidisciplinary care as well as multimodality treatments. This review serves as a primer for early recognition of deficits and initiation of appropriate treatments.

Charles Gilbert, Wu Li (2013)
Re-entrant or feedback pathways between cortical areas carry rich and varied information about behavioural context, including attention, expectation, perceptual tasks, working memory and motor commands. Neurons receiving such inputs effectively function as adaptive processors that are able to assume different functional states according to the task being executed. Recent data suggest that the selection of particular inputs, representing different components of an association field, enable neurons to take on different functional roles. In this Review, we discuss the various top-down influences exerted on the visual cortical pathways and highlight the dynamic nature of the receptive field, which allows neurons to carry information that is relevant to the current perceptual demands.

The neuropathology of traumatic brain injury.

Ciaran S Hill, Michael P. Coleman, David Menon (2016)
Traumatic axonal injury (TAI) is an important pathoanatomical subgroup of traumatic brain injury (TBI) and a major driver of mortality and functional impairment. Experimental models have provided insights into the effects of mechanical deformation on the neuronal cytoskeleton and the subsequent processes that drive axonal injury. There is also increasing recognition that axonal or white matter loss may progress for years post-injury and represent one mechanistic framework for progressive neurodegeneration after TBI. Previous trials of novel therapies have failed to make an impact on clinical outcome, in both TBI in general and TAI in particular. Recent advances in understanding the cellular and molecular mechanisms of injury have the potential to translate into novel therapeutic targets.