Monumental landscapes of the Holocene humid period in Northern Arabia: The mustatil phenomenon 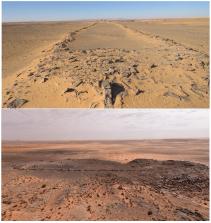 Between 10 and six thousand years ago the Arabian Peninsula saw the most recent of the ‘Green Arabia’ periods, when increased rainfall transformed this generally arid region. The transition to the Neolithic in Arabia occurred during this period of climatic amelioration. Various forms of stone structures are abundant in northern Arabia, and it has been speculated that some of these dated to the Neolithic, but there has been little research on their character and chronology. Here we report a study of 104 ‘mustatil’ stone structures from the southern margins of the Nefud Desert in northern Arabia. We provide the first chronometric age estimate for this type of structure – a radiocarbon date of ca. 5000 BC – and describe their landscape positions, architecture and associated material culture and faunal remains. The structure we have dated is the oldest large-scale stone structure known from the Arabian Peninsula. The mustatil phenomenon represents a remarkable development of monumental architecture, as hundreds of these structures were built in northwest Arabia. This ‘monumental landscape’ represents one of the earliest large-scale forms of monumental stone structure construction anywhere in the world. Further research is needed to understand the function of these structures, but we hypothesise that they were related to rituals in the context of the adoption of pastoralism and resulting territoriality in the challenging environments of northern Arabia.

Anna K. Behrensmeyer (1978)
Bones of recent mammals in the Amboseli Basin, southern Kenya, exhibit distinctive weathering characteristics that can be related to the time since death and to the local conditions of temperature, humidity and soil chemistry. A categorization of weathering characteristics into six stages, recognizable on descriptive criteria, provides a basis for investigation of weathering rates and processes. The time necessary to achieve each successive weathering stage has been calibrated using known-age carcasses. Most bones decompose beyond recognition in 10 to 15 yr. Bones of animals under 100 kg and juveniles appear to weather more rapidly than bones of large animals or adults. Small-scale rather than widespread environmental factors seem to have greatest influence on weathering characteristics and rates. Bone weathering is potentially valuable as evidence for the period of time represented in recent or fossil bone assemblages, including those on archeological sites, and may also be an important tool in censusing populations of animals in modern ecosystems.

High-resolution mapping of global surface water and its long-term changes.

Jean-François Pekel, Andrew Cottam, Noel Gorelick … (2016)
The location and persistence of surface water (inland and coastal) is both affected by climate and human activity and affects climate, biological diversity and human wellbeing. Global data sets documenting surface water location and seasonality have been produced from inventories and national descriptions, statistical extrapolation of regional data and satellite imagery, but measuring long-term changes at high resolution remains a challenge. Here, using three million Landsat satellite images, we quantify changes in global surface water over the past 32 years at 30-metre resolution. We record the months and years when water was present, where occurrence changed and what form changes took in terms of seasonality and persistence. Between 1984 and 2015 permanent surface water has disappeared from an area of almost 90,000 square kilometres, roughly equivalent to that of Lake Superior, though new permanent bodies of surface water covering 184,000 square kilometres have formed elsewhere. All continental regions show a net increase in permanent water, except Oceania, which has a fractional (one per cent) net loss. Much of the increase is from reservoir filling, although climate change is also implicated. Loss is more geographically concentrated than gain. Over 70 per cent of global net permanent water loss occurred in the Middle East and Central Asia, linked to drought and human actions including river diversion or damming and unregulated withdrawal. Losses in Australia and the USA linked to long-term droughts are also evident. This globally consistent, validated data set shows that impacts of climate change and climate oscillations on surface water occurrence can be measured and that evidence can be gathered to show how surface water is altered by human activities. We anticipate that this freely available data will improve the modelling of surface forcing, provide evidence of state and change in wetland ecotones (the transition areas between biomes), and inform water-management decision-making.

This article is distributed under the terms of the Creative Commons Attribution 4.0 License ( https://creativecommons.org/licenses/by/4.0/) which permits any use, reproduction and distribution of the work without further permission provided the original work is attributed as specified on the SAGE and Open Access page ( https://us.sagepub.com/en-us/nam/open-access-at-sage).