COVID-19 risk and outcomes in patients with substance use disorders: analyses from electronic health records in the United States 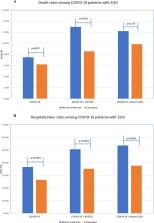 The global pandemic of COVID-19 is colliding with the epidemic of opioid use disorders (OUD) and other substance use disorders (SUD) in the United States (US). Currently, there is limited data on risks, disparity, and outcomes for COVID-19 in individuals suffering from SUD. This is a retrospective case-control study of electronic health records (EHRs) data of 73,099,850 unique patients, of whom 12,030 had a diagnosis of COVID-19. Patients with a recent diagnosis of SUD (within past year) were at significantly increased risk for COVID-19 (adjusted odds ratio or AOR = 8.699 [8.411–8.997], P < 10 −30), an effect that was strongest for individuals with OUD (AOR = 10.244 [9.107–11.524], P < 10 −30), followed by individuals with tobacco use disorder (TUD) (AOR = 8.222 ([7.925–8.530], P < 10 −30). Compared to patients without SUD, patients with SUD had significantly higher prevalence of chronic kidney, liver, lung diseases, cardiovascular diseases, type 2 diabetes, obesity and cancer. Among patients with recent diagnosis of SUD, African Americans had significantly higher risk of COVID-19 than Caucasians (AOR = 2.173 [2.01–2.349], P < 10 −30), with strongest effect for OUD (AOR = 4.162 [3.13–5.533], P < 10 −25). COVID-19 patients with SUD had significantly worse outcomes (death: 9.6%, hospitalization: 41.0%) than general COVID-19 patients (death: 6.6%, hospitalization: 30.1%) and African Americans with COVID-19 and SUD had worse outcomes (death: 13.0%, hospitalization: 50.7%) than Caucasians (death: 8.6%, hospitalization: 35.2%). These findings identify individuals with SUD, especially individuals with OUD and African Americans, as having increased risk for COVID-19 and its adverse outcomes, highlighting the need to screen and treat individuals with SUD as part of the strategy to control the pandemic while ensuring no disparities in access to healthcare support.

Collision of the COVID-19 and Addiction Epidemics

Nora D. Volkow (2020)
People with substance use disorder may be especially susceptible to COVID-19, and compromised lung function from COVID-19 could also put at risk those who have opioid use disorder and methamphetamine use disorder. This commentary describes the risks of the collision of the COVID-19 and addiction epidemics.

Tobacco Product Use and Cessation Indicators Among Adults — United States, 2018

Ivan Berlin,  Daniel Thomas,  Anne-Laurence Le Faou … (2020)
COVID-19 is mainly a disease of the respiratory tract characterized by a severe acute respiratory syndrome; the causative agent is SARS-CoV-2 (Severe Acute Respiratory Syndrome Coronavirus 2). The virus main entrance way is through mucosal tissues: nose, mouth, upper respiratory tract, and less frequently conjunctival mucosa. Tobacco smoke exposure results in inflammatory processes in the lung, increased mucosal inflammation, expression of inflammatory cytokines and tumor necrosis factor α, increased permeability in epithelial cells, mucus overproduction, and impaired mucociliary clearance. 1 Knowledge about host factors, and in particular avoidable host factors such as smoking, may be of importance in reducing viral contamination and the severity of the disease. The SARS-CoV-2 pandemic started in Wuhan, China toward the end of 2019. To the best of our knowledge and at the time of the writing of this Commentary, six published case series reported the prevalence of smoking among individuals with COVID-19 (Table 1). The study with the highest number of patients compared severe (N = 173) to nonsevere (N = 926) cases. The percent of current and former smokers were higher among the severe cases: 17% and 5%, respectively, than among the nonsevere cases (12% and 1%, respectively). 2 More importantly, among those with the primary composite end point (admission to an intensive care unit, the use of mechanical ventilation, or death), the proportion of smokers was higher with than among those without this end point (26% vs. 12%). 2 Another case series also showed more smokers among the severe (N = 58) than among the nonsevere (N = 82) cases. 3 The single modifiable host factor associated with progression of COVID-19 pneumonia was current smoking in a multivariable logistic analysis (odds ratio = 14.3, 95% confidence interval: 1.6–25.0). 4 Among those who died the number of smokers was also been found to be somewhat higher (9%, 5/54) than among survivors (6%, 9/137). 5 Table 1. Frequency of Smoking and Former Smoking Among COVID-19 Patients. N (%) Guan et al. 2 Nonsevere, N = 926 Severe, N = 173 Primary composite end point (admission to an intensive care unit, the use of mechanical ventilation, or death) Never smoked 793/913 (86.9) 134/172 (77.9) Yes 44/66 (66.7%) No 883/1019 (86.7%) Former smoker 12/913 (1.3) 9/172 (5.2) Yes 5/66 (7.6%) No 16/1019 (1.6%) Current smoker 108/913 (11.8) 29/172 (16.9) Yes 7/66 (25.8%) No 120/1019 (11.8%) Zhang et al. 3 Hospitalized for COVID-19 Nonsevere, N = 82 Severe, N = 58 Current smokers 0/82 2/58 (3.4) Past-smokers 3/82 (3.7) 4/58 (6.9) Cigarettes smoked per day × years of smoking   15 years). 14 The similar upregulation associated with smoking of two different virus receptors observed with two different coronaviruses suggests that smoking contributes to the higher number of viral receptors and may support the findings of the recent case series observations. It is also worth noting that smoking behavior is characterized by inhalation and by repetitive hand-to-mouth movements which are strongly advised against to reduce viral contamination. Public health interventions, such as lockdown, may increase the exposure of family members to secondhand smoke. Lockdown may be an opportune moment to quit to reduce not only the smoker’s health risk but also that of his/her family members. Finally, risk factors of COVID-19 severity (lung and cardiovascular disorders, diabetes, etc.) are more frequent among smokers. Smoking cessation by any means should be a priority among smokers with comorbidities. Future Research Directions The nicotine and tobacco research community should explore the role of tobacco in the current COVID-19 pandemic. We need stronger evidence about the association of smoking with COVID-19. Databases should be identified and analyses focused on the role of this association in virus contamination, severity of the illness, ability to recover, and so on. Smoking status data should be systematically recorded and analyzed among COVID-19 patients. We need data about the immediate and short-term benefit of quitting smoking among symptomatic COVID-19 smokers. Laboratory studies should focus on quantifying the viral contamination of tobacco products with particular attention to shared products such as waterpipes. We also need data about alternative nicotine delivery systems and their risk/benefit ratio in relation to COVID-19. Public Health Challenges/Opportunities We suggest that ongoing public health campaigns should include reference to the importance of smoking cessation during the pandemic. Health care providers should be involved in offering evidence-based pharmacological and behavioral smoking cessation interventions by remote support. Quit lines should promote contacts with smokers with or without COVID-19, symptomatic or asymptomatic. Lockdown may result in social isolation and mental distress both increasing the need for smoking; smoking is more prevalent among economically less-advantaged groups, and they are potentially at higher risk for COVID-19. Large-scale interventions should be targeted at these populations in particular. Supplementary Material A Contributorship Form detailing each author’s specific involvement with this content, as well as any supplementary data, are available online at https://academic.oup.com/ntr. Declaration of Interests None declared.