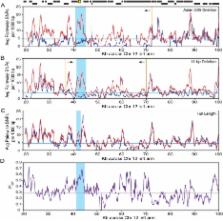 A major goal in evolutionary biology is to understand how adaptive evolution has influenced natural variation, but identifying loci subject to positive selection has been a challenge. Here we present the adaptive loss of a pair of paralogous genes in specific Saccharomyces cerevisiae subpopulations. We mapped natural variation in freeze-thaw tolerance to two water transporters, AQY1 and AQY2, previously implicated in freeze-thaw survival. However, whereas freeze-thaw–tolerant strains harbor functional aquaporin genes, the set of sensitive strains lost aquaporin function at least 6 independent times. Several genomic signatures at AQY1 and/or AQY2 reveal low variation surrounding these loci within strains of the same haplotype, but high variation between strain groups. This is consistent with recent adaptive loss of aquaporins in subgroups of strains, leading to incipient balancing selection. We show that, although aquaporins are critical for surviving freeze-thaw stress, loss of both genes provides a major fitness advantage on high-sugar substrates common to many strains' natural niche. Strikingly, strains with non-functional alleles have also lost the ancestral requirement for aquaporins during spore formation. Thus, the antagonistic effect of aquaporin function—providing an advantage in freeze-thaw tolerance but a fitness defect for growth in high-sugar environments—contributes to the maintenance of both functional and nonfunctional alleles in S. cerevisiae. This work also shows that gene loss through multiple missense and nonsense mutations, hallmarks of pseudogenization presumed to emerge after loss of constraint, can arise through positive selection.

Local adaptation is thought to be a driving force in population differentiation and the formation of new species. Yet, there are few examples of ecologically relevant phenotypes that have been mapped to individual genes, making it difficult to know what drives the evolution of such genes and contributes to the molecular mechanisms underlying divergence. Here, we provide a unique case of local adaptation through multi-gene loss. We mapped the genetic basis for natural variation in yeast freeze-thaw tolerance to two water transporters, AQY1 and AQY2. Although tolerant strains harbor functional alleles of both genes, the set of sensitive strains lost aquaporins at least 6 independent times, through missense mutations and frame-shifting deletions. Genome-wide scans reveal several signatures of recent, partial selective sweeps at the aquaporin loci, indicating positive selection for gene loss. This was likely driven by a major fitness advantage of aquaporin loss when cells grow in high sugar concentrations common to many strains' niche. Surprisingly, strains that lost aquaporins also lost the ancestral requirement for these genes during sexual reproduction. This work provides a compelling example of how gene loss through nonsense mutations, a hallmark of pseudogenization, is caused not by loss of constraint but by positive selection.

Adaptive protein evolution at the Adh locus in Drosophila.

Kyle J. McDonald,  H. McDonald,  M Kreitman (1991)
Proteins often differ in amino-acid sequence across species. This difference has evolved by the accumulation of neutral mutations by random drift, the fixation of adaptive mutations by selection, or a mixture of the two. Here we propose a simple statistical test of the neutral protein evolution hypothesis based on a comparison of the number of amino-acid replacement substitutions to synonymous substitutions in the coding region of a locus. If the observed substitutions are neutral, the ratio of replacement to synonymous fixed differences between species should be the same as the ratio of replacement to synonymous polymorphisms within species. DNA sequence data on the Adh locus (encoding alcohol dehydrogenase, EC 1.1.1.1) in three species in the Drosophila melanogaster species subgroup do not fit this expectation; instead, there are more fixed replacement differences between species than expected. We suggest that these excess replacement substitutions result from adaptive fixation of selectively advantageous mutations.

A Map of Recent Positive Selection in the Human Genome

Publisher ID: 09-PLGE-RA-2073R2
DOI: 10.1371/journal.pgen.1000893
PMC ID: 2848549
PubMed ID: 20369021
Copyright statement: Will et al. This is an open-access article distributed under the terms of the Creative Commons Attribution License, which permits unrestricted use, distribution, and reproduction in any medium, provided the original author and source are credited.