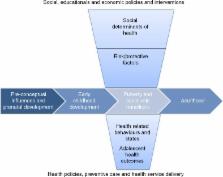 Adolescence is a time of physical, emotional and social transitions that have implications for health. In addition to being at high risk for HIV, young key populations (YKP) may experience other health problems attributable to high-risk behaviour or their developmental stage, or a combination of both.

We reviewed the needs, barriers and gaps for other non-HIV health services for YKP. We searched PubMed and Google Scholar for articles that provided specific age-related data on sexual and reproductive health; mental health; violence; and substance use problems for adolescent, youth or young sex workers, men who have sex with men, transgender people, and people who inject drugs.

YKP experience more unprotected sex, sexually transmitted infections including HIV, unintended pregnancy, violence, mental health disorders and substance use compared to older members of key populations and youth among the general population. YKP experience significant barriers to accessing care; coverage of services is low, largely because of stigma and discrimination experienced at both the health system and policy levels.

YKP require comprehensive, integrated services that respond to their specific developmental needs, including health, educational and social services within the context of a human rights-based approach. The recent WHO Consolidated Guidelines on HIV Prevention, Diagnosis, Treatment and Care for Key Populations are an important first step for a more comprehensive approach to HIV programming for YKP, but there are limited data on the effective delivery of combined interventions for YKP. Significant investments in research and implementation will be required to ensure adequate provision and coverage of services for YKP. In addition, greater commitments to harm reduction and rights-based approaches are needed to address structural barriers to access to care.

Patrick McGorry,  Vikram Patel,  Sarah E. Hetrick … (2007)
Mental disorders account for a large proportion of the disease burden in young people in all societies. Most mental disorders begin during youth (12-24 years of age), although they are often first detected later in life. Poor mental health is strongly related to other health and development concerns in young people, notably lower educational achievements, substance abuse, violence, and poor reproductive and sexual health. The effectiveness of some interventions for some mental disorders in this age-group have been established, although more research is urgently needed to improve the range of affordable and feasible interventions, since most mental-health needs in young people are unmet, even in high-income countries. Key challenges to addressing mental-health needs include the shortage of mental-health professionals, the fairly low capacity and motivation of non-specialist health workers to provide quality mental-health services to young people, and the stigma associated with mental disorder. We propose a population-based, youth focused model, explicitly integrating mental health with other youth health and welfare expertise. Addressing young people's mental-health needs is crucial if they are to fulfil their potential and contribute fully to the development of their communities.

Laura Nyblade,  Anne Stangl,  Ellen Weiss … (2009)
The purpose of this review paper is to provide information and guidance to those in the health care setting about why it is important to combat HIV-related stigma and how to successfully address its causes and consequences within health facilities. Research shows that stigma and discrimination in the health care setting and elsewhere contributes to keeping people, including health workers, from accessing HIV prevention, care and treatment services and adopting key preventive behaviours. Studies from different parts of the world reveal that there are three main immediately actionable causes of HIV-related stigma in health facilities: lack of awareness among health workers of what stigma looks like and why it is damaging; fear of casual contact stemming from incomplete knowledge about HIV transmission; and the association of HIV with improper or immoral behaviour. To combat stigma in health facilities, interventions must focus on the individual, environmental and policy levels. The paper argues that reducing stigma by working at all three levels is feasible and will likely result in long-lasting benefits for both health workers and HIV-positive patients. The existence of tested stigma-reduction tools and approaches has moved the field forward. What is needed now is the political will and resources to support and scale up stigma-reduction activities throughout health care settings globally.

Fiona Gore,  Paul Bloem,  George C Patton … (2011)
Young people aged 10-24 years represent 27% of the world's population. Although important health problems and risk factors for disease in later life emerge in these years, the contribution to the global burden of disease is unknown. We describe the global burden of disease arising in young people and the contribution of risk factors to that burden. We used data from WHO's 2004 Global Burden of Disease study. Cause-specific disability-adjusted life-years (DALYs) for young people aged 10-24 years were estimated by WHO region on the basis of available data for incidence, prevalence, severity, and mortality. WHO member states were classified into low-income, middle-income, and high-income countries, and into WHO regions. We estimated DALYs attributable to specific global health risk factors using the comparative risk assessment method. DALYs were divided into years of life lost because of premature mortality (YLLs) and years lost because of disability (YLDs), and are presented for regions by sex and by 5-year age groups. The total number of incident DALYs in those aged 10-24 years was about 236 million, representing 15·5% of total DALYs for all age groups. Africa had the highest rate of DALYs for this age group, which was 2·5 times greater than in high-income countries (208 vs 82 DALYs per 1000 population). Across regions, DALY rates were 12% higher in girls than in boys between 15 and 19 years (137 vs 153). Worldwide, the three main causes of YLDs for 10-24-year-olds were neuropsychiatric disorders (45%), unintentional injuries (12%), and infectious and parasitic diseases (10%). The main risk factors for incident DALYs in 10-24-year-olds were alcohol (7% of DALYs), unsafe sex (4%), iron deficiency (3%), lack of contraception (2%), and illicit drug use (2%). The health of young people has been largely neglected in global public health because this age group is perceived as healthy. However, opportunities for prevention of disease and injury in this age group are not fully exploited. The findings from this study suggest that adolescent health would benefit from increased public health attention. None. Copyright © 2011 Elsevier Ltd. All rights reserved.