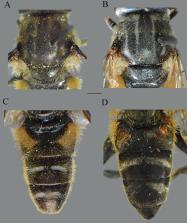 Reinhold J. Medina,  Karina Rodriguez,  Emily J Oliver … (1990)
DNA sequence evolution through nucleotide substitution may be assimilated to a stationary Markov process. The fundamental equations of the general model, with 12 independent substitution parameters, are used to obtain a formula which corrects the effect of multiple and parallel substitutions on the measure of evolutionary divergence between two homologous sequences. We show that only reversible models, with six independent parameters, allow the calculation of the substitution rates. Simulation experiments on DNA sequence evolution through nucleotide substitution call into question the effectiveness of the general model (and of any other more detailed description); nevertheless, the general model results are slightly superior to any of its particular cases.

Hiroyuki Toh,  George Asimenos,  Kazutaka Katoh (2008)
Multiple alignment of DNA sequences is an important step in various molecular biological analyses. As a large amount of sequence data is becoming available through genome and other large-scale sequencing projects, scalability, as well as accuracy, is currently required for a multiple sequence alignment (MSA) program. In this chapter, we outline the algorithms of an MSA program MAFFT and provide practical advice, focusing on several typical situations a biologist sometimes faces. For genome alignment, which is beyond the scope of MAFFT, we introduce two tools: TBA and MAUVE.

Hong Chen,  Murugesan Rangasamy,  Sek Yee Tan … (2010)
Background DNA extraction is a routine step in many insect molecular studies. A variety of methods have been used to isolate DNA molecules from insects, and many commercial kits are available. Extraction methods need to be evaluated for their efficiency, cost, and side effects such as DNA degradation during extraction. Methodology/Principal Findings From individual western corn rootworm beetles, Diabrotica virgifera virgifera, DNA extractions by the SDS method, CTAB method, DNAzol® reagent, Puregene® solutions and DNeasy® column were compared in terms of DNA quantity and quality, cost of materials, and time consumed. Although all five methods resulted in acceptable DNA concentrations and absorbance ratios, the SDS and CTAB methods resulted in higher DNA yield (ng DNA vs. mg tissue) at much lower cost and less degradation as revealed on agarose gels. The DNeasy® kit was most time-efficient but was the costliest among the methods tested. The effects of ethanol volume, temperature and incubation time on precipitation of DNA were also investigated. The DNA samples obtained by the five methods were tested in PCR for six microsatellites located in various positions of the beetle's genome, and all samples showed successful amplifications. Conclusion/Significance These evaluations provide a guide for choosing methods of DNA extraction from western corn rootworm beetles based on expected DNA yield and quality, extraction time, cost, and waste control. The extraction conditions for this mid-size insect were optimized. The DNA extracted by the five methods was suitable for further molecular applications such as PCR and sequencing by synthesis.