Kinetics of Procalcitonin in Pediatric Patients on Extracorporeal Membrane Oxygenation 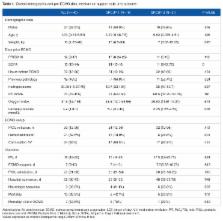 To assess the kinetics of procalcitonin (PCT) and C-reactive protein (CRP) in pediatric patients who required extracorporeal membrane oxygenation (ECMO) and to analyze its relationship with morbidity and mortality.

Prospective observational study including pediatric patients who required ECMO. Both PCT and CRP were sequentially drawn before ECMO (P0) and until 72 hours after ECMO.

A total of 40 patients were recruited. Two cohorts were established based on the value of the P0 PCT (>10 ng/mL). Comparing the kinetics of PCT and CRP in these cohorts, the described curves were the expected for each clinical situation. The cutoff for P0 PCT to predict multiple organ dysfunction syndrome was 2.55 ng/mL (sensibility 83%, specificity 100%). Both PCT and CRP did not predict risk of neurologic sequelae or mortality in any group.

Procalcitonin does not seem to be modified by ECMO and could be a good biomarker of evolution.

The inflammatory response to extracorporeal membrane oxygenation (ECMO): a review of the pathophysiology

Jonathan Millar,  Jonathon P Fanning,  Charles Mcdonald … (2016)
Extracorporeal membrane oxygenation (ECMO) is a technology capable of providing short-term mechanical support to the heart, lungs or both. Over the last decade, the number of centres offering ECMO has grown rapidly. At the same time, the indications for its use have also been broadened. In part, this trend has been supported by advances in circuit design and in cannulation techniques. Despite the widespread adoption of extracorporeal life support techniques, the use of ECMO remains associated with significant morbidity and mortality. A complication witnessed during ECMO is the inflammatory response to extracorporeal circulation. This reaction shares similarities with the systemic inflammatory response syndrome (SIRS) and has been well-documented in relation to cardiopulmonary bypass. The exposure of a patient’s blood to the non-endothelialised surface of the ECMO circuit results in the widespread activation of the innate immune system; if unchecked this may result in inflammation and organ injury. Here, we review the pathophysiology of the inflammatory response to ECMO, highlighting the complex interactions between arms of the innate immune response, the endothelium and coagulation. An understanding of the processes involved may guide the design of therapies and strategies aimed at ameliorating inflammation during ECMO. Likewise, an appreciation of the potentially deleterious inflammatory effects of ECMO may assist those weighing the risks and benefits of therapy.

Correlation of procalcitonin and C-reactive protein to inflammation, complications, and outcome during the intensive care unit course of multiple-trauma patients

Michael Meisner,  Heide Adina,  Joachim Schmidt (2005)
Background A comparison of the amount of and the kinetics of induction of procalcitonin (PCT) with that of C-reactive protein (CRP) during various types of and severities of multiple trauma, and their relation to trauma-related complications, was performed. Methods Ninety adult trauma patients admitted to the intensive care unit of our tertiary care hospital were evaluated in a prospective case study. During the initial 24 hours after trauma the Injury Severity Score, the Sepsis-related Organ Failure Assessment score, and the Acute Physiology and Chronic Health Evaluation II score were evaluated. PCT, CRP, the sepsis criteria (American College of Chest Physicians/Society of Critical Care Medicine definitions), and the Sepsis-related Organ Failure Assessment score were measured at days 1–7, as well as at days 14 and 21, concluding the observation period with the 28-day survival. Results The induction of PCT and CRP varied in patients suffering from trauma. PCT increased only moderately in most patients and peaked at day 1–2 after trauma, the concentrations rapidly declining thereafter. CRP ubiquitously increased and its kinetics were much slower. Complications such as sepsis, infection, blood transfusion, prolonged intensive care unit treatment, and poor outcome were more frequent in patients with initially high PCT (>1 ng/ml), whereas increases of CRP showed no positive correlation. Conclusion In patients with multiple trauma due to an accident, the PCT level provides more information than the CRP level since only moderate amounts of PCT are induced, and higher concentrations correlate with more severe trauma and a higher frequency of various complications, including sepsis and infection. Most importantly, the moderate trauma-related increase of PCT and the rapidly declining concentrations provide a baseline value near to the normal range at an earlier time frame than for CRP, thus allowing a faster and more valid prediction of sepsis during the early period after trauma.