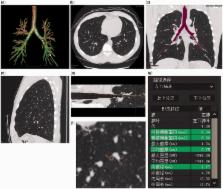 This study was performed to evaluate the effect of sex on bronchial parameters and the predicted forced expiratory volume in 1 s expressed as a percentage of the forced vital capacity (FEV1% pred) on pulmonary function testing.

Yuya Onodera,  Katsura Nagai,  Hironi Makita … (2006)
Chronic obstructive pulmonary disease (COPD) is characterized by airflow limitation caused by emphysema and/or airway narrowing. Computed tomography has been widely used to assess emphysema severity, but less attention has been paid to the assessment of airway disease using computed tomography. To obtain longitudinal images and accurately analyze short axis images of airways with an inner diameter>or=2 mm located anywhere in the lung with new software for measuring airway dimensions using curved multiplanar reconstruction. In 52 patients with clinically stable COPD (stage I, 14; stage II, 22; stage III, 14; stage IV, 2), we used the software to analyze the relationship of the airflow limitation index (FEV1, % predicted) with the airway dimensions from the third to the sixth generations of the apical bronchus (B1) of the right upper lobe and the anterior basal bronchus (B8) of the right lower lobe. Airway luminal area (Ai) and wall area percent (WA%) were significantly correlated with FEV1 (% predicted). More importantly, the correlation coefficients (r) improved as the airways became smaller in size from the third (segmental) to sixth generations in both bronchi (Ai: r=0.26, 0.37, 0.58, and 0.64 for B1; r=0.60, 0.65, 0.63, and 0.73 for B8). We are the first to use three-dimensional computed tomography to demonstrate that airflow limitation in COPD is more closely related to the dimensions of the distal (small) airways than proximal (large) airways.

Smoking prevalence, behaviours, and cessation among individuals with COPD or asthma.

Nicholas T Vozoris,  Matthew Stanbrook (2011)
Smoking prevalence, behaviours, physician counselling regarding smoking cessation, and smoking cessation medications were evaluated among male and female smokers with COPD and asthma compared to the general smoking population. Data from the large, nationally representative Canadian Community Health Survey (CCHS) was used (for 2003 CCHS, n = 134,072). All data were based on self-report, including the presence of COPD and asthma which were defined by health-professional diagnosis. Nicotine addiction was assessed by the Fagerstrom Test for Nicotine Dependence. In 2003, 32.8% of individuals with COPD, 21.0% with asthma, and 22.1% without COPD or asthma were current smokers. After adjusting for sociodemographic and smoking behaviour confounders, among current smokers, greater odds of high or very high nicotine addiction were observed among women with versus without COPD (OR = 2.49, 95% CI = 1.41-4.39), and among women with versus without asthma (OR = 1.74, 95% CI = 1.01-2.99), but no associations were seen among men. Smokers with COPD and asthma were no more likely to have received physician counselling regarding smoking cessation, nor smoking cessation pharmacotherapy compared to the general smoking population. Gender differences were observed in the association between COPD and asthma and higher nicotine addition levels in current smokers. These findings could in part explain population trends showing that COPD and asthma are increasing more rapidly in women. Physician counselling and pharmacotherapy for smoking cessation do not appear to be received more frequently among individuals with COPD or asthma compared to the general smoking population, despite the greater vulnerability of such patients to smoking effects. Copyright © 2010 Elsevier Ltd. All rights reserved.

Racial and gender differences in susceptibility to tobacco smoke among patients with chronic obstructive pulmonary disease.

Mark T Dransfield,  Lynn B Gerald,  Kevin Bailey … (2006)
Although chronic obstructive pulmonary disease (COPD) has been considered a disease of Caucasian men, recent data show mortality rising faster among women and African-Americans. Some have suggested these groups are more susceptible to tobacco smoke. We examined this issue in our own population of COPD patients. Beginning in March 2003 we prospectively developed a COPD research database to facilitate recruitment for clinical trials. Enrollees are recruited from clinics and paid advertising and their demographics, medical/smoking histories, and spirometric data are recorded. We examined the smoking histories and pulmonary function of enrollees over 45, with 20 pack-years of smoking, FEV(1)/FVC (forced expiratory volume forced vital capacity) <0.70, and a race-adjusted post-bronchodilator FEV(1)<80%. The primary outcome was the loss of lung function per pack-year smoked, or Susceptibility Index (SI), calculated using the formula: (% predicted FEV(1)-100)/pack-years. A total of 585 patients enrolled during the study period and 330 met our inclusion criteria. Caucasians were older than African-Americans (63 vs. 58, P=0.0003) and had more pack-years of smoking (57 vs. 43, P=0.0003). There were no differences in lung function or bronchodilator reversibility among the racial or gender subgroups. Caucasians had less loss of lung function per pack-year smoked than African-Americans (SI=-1.02% vs. -1.34%, P=0.007) and men less than women (SI=-0.98% vs. -1.21%, P=0.001). Caucasian males appeared relatively protected from tobacco smoke (SI=-0.93%), while African-American women appeared most susceptible (SI=-1.42%). There are important differences in racial and gender susceptibility to tobacco smoke among patients with COPD. African-American females appear to be at highest risk and may benefit most from smoking cessation.