Chaos and Hyperchaos in a Model of Ribosome Autocatalytic Synthesis 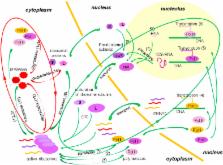 Any vital activities of the cell are based on the ribosomes, which not only provide the basic machinery for the synthesis of all proteins necessary for cell functioning during growth and division, but for biogenesis itself. From this point of view, ribosomes are self-replicating and autocatalytic structures. In current work we present an elementary model in which the autocatalytic synthesis of ribosomal RNA and proteins, as well as enzymes ensuring their degradation are described with two monotonically increasing functions. For certain parameter values, the model, consisting of one differential equation with delayed argument, demonstrates both stationary and oscillatory dynamics of the ribosomal protein synthesis, which can be chaotic and hyperchaotic dependent on the value of the delayed argument. The biological interpretation of the modeling results and parameter estimation suggest the feasibility of chaotic dynamics in molecular genetic systems of eukaryotes, which depends only on the internal characteristics of functioning of the translation system.

Bradley Brown,  Daniel Herschlag,  John M. D. Storey … (2003)
We have analyzed the translational status of each mRNA in rapidly growing Saccharomyces cerevisiae. mRNAs were separated by velocity sedimentation on a sucrose gradient, and 14 fractions across the gradient were analyzed by quantitative microarray analysis, providing a profile of ribosome association with mRNAs for thousands of genes. For most genes, the majority of mRNA molecules were associated with ribosomes and presumably engaged in translation. This systematic approach enabled us to recognize genes with unusual behavior. For 43 genes, most mRNA molecules were not associated with ribosomes, suggesting that they may be translationally controlled. For 53 genes, including GCN4, CPA1, and ICY2, three genes for which translational control is known to play a key role in regulation, most mRNA molecules were associated with a single ribosome. The number of ribosomes associated with mRNAs increased with increasing length of the putative protein-coding sequence, consistent with longer transit times for ribosomes translating longer coding sequences. The density at which ribosomes were distributed on each mRNA (i.e., the number of ribosomes per unit ORF length) was well below the maximum packing density for nearly all mRNAs, consistent with initiation as the rate-limiting step in translation. Global analysis revealed an unexpected correlation: Ribosome density decreases with increasing ORF length. Models to account for this surprising observation are discussed.

John Woolford,  Susan Baserga (2013)
Ribosomes are highly conserved ribonucleoprotein nanomachines that translate information in the genome to create the proteome in all cells. In yeast these complex particles contain four RNAs (>5400 nucleotides) and 79 different proteins. During the past 25 years, studies in yeast have led the way to understanding how these molecules are assembled into ribosomes in vivo. Assembly begins with transcription of ribosomal RNA in the nucleolus, where the RNA then undergoes complex pathways of folding, coupled with nucleotide modification, removal of spacer sequences, and binding to ribosomal proteins. More than 200 assembly factors and 76 small nucleolar RNAs transiently associate with assembling ribosomes, to enable their accurate and efficient construction. Following export of preribosomes from the nucleus to the cytoplasm, they undergo final stages of maturation before entering the pool of functioning ribosomes. Elaborate mechanisms exist to monitor the formation of correct structural and functional neighborhoods within ribosomes and to destroy preribosomes that fail to assemble properly. Studies of yeast ribosome biogenesis provide useful models for ribosomopathies, diseases in humans that result from failure to properly assemble ribosomes.

A Mougin,  Y. Henry Sun,  Anthony Henras … (2008)
One of the most important tasks of any cell is to synthesize ribosomes. In eukaryotes, this process occurs sequentially in the nucleolus, the nucleoplasm and the cytoplasm. It involves the transcription and processing of pre-ribosomal RNAs, their proper folding and assembly with ribosomal proteins and the transport of the resulting pre-ribosomal particles to the cytoplasm where final maturation events occur. In addition to the protein and RNA constituents of the mature cytoplasmic ribosomes, this intricate process requires the intervention of numerous protein and small RNA trans-acting factors. These transiently interact with pre-ribosomal particles at various stages of their maturation. Most of the constituents of pre-ribosomal particles have probably now been identified and research in the field is starting to unravel the timing of their intervention and their precise mode of action. Moreover, quality control mechanisms are being discovered that monitor ribosome synthesis and degrade the RNA components of defective pre-ribosomal particles.