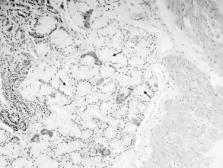 Bacterial-associated diarrhea in the dog: a critical appraisal.

Stanley L. Marks,  Elizabeth Kather (2003)
The clinical documentation of enteropathogenic bacteria causing diarrhea in dogs is clouded by the presence of many of these organisms existing as normal constituents of the indigenous intestinal flora. The diagnosis of a putative bacterial enteropathogen(s) in dogs should be made based on a combination of parameters, including signalment and predisposing factors, clinical signs, serologic assays for toxins, fecal culture, and PCR. Relying on results of fecal culture alone is problematic, because C perfringens, C difficile, Campylobacter spp, and pathogenic and non-pathogenic E coli are commonly isolated from apparently healthy dogs [10,13,33]. Nevertheless, culture may be useful in procuring isolates for the application of molecular techniques, such as PCR, for detection of specific toxin genes or molecular typing of isolated strains to establish clonality in suspected outbreaks. The oversimplistic attempt to characterize bacterially associated diarrhea by anatomic localization of clinical signs should be discouraged, because most of the previously mentioned bacteria have been associated with small and large intestinal diarrhea. Accurate diagnosis of infections may require diagnostic laboratories to incorporate PCR-based assays using genus- and species-specific primers to facilitate detection of toxin genes and differentiation of species that appear phenotypically and biochemically similar. There has been tremendous interest in the application of microarray technology for the simultaneous detection of thousands of genes or target DNA sequences on one glass slide. This powerful tool could be used for detection of specific pathogenic bacterial strains in fecal specimens obtained from dogs in the future.

Protective immunity to rabbit oral and cutaneous papillomaviruses by immunization with short peptides of L2, the minor capsid protein.

Lynn R. Budgeon,  Monica E. Embers,  Neil Christensen … (2002)
The papillomavirus minor capsid protein, L2, has been shown to exhibit immunogenicity, whereby a variety of B-cell epitopes, predominantly in the amino terminus of L2, have been deduced. However, immunity to L2 in vivo has not been examined extensively. Notably, a common neutralization epitope for human papillomavirus (HPV) types 6 and 16 was mapped to amino acids (aa) 108 to 120. The objectives of this study were to derive antisera from rabbits using the corresponding sequences from rabbit viruses and to assess the ability of these peptides to protect against infection. Synthetic peptides consisting of two overlapping sequences each in the region of aa 94 to 122 of the rabbit oral (ROPV) and cottontail rabbit (CRPV) papillomaviruses were used to immunize rabbits. Rabbits were then infected with both ROPV and CRPV and monitored for the development of oral and cutaneous papillomas, respectively. Serum derived from rabbits immunized with either of the two peptides was shown to (i) react to purified L2 from the cognate virus, (ii) specifically recognize L2 within virus-infected cells, and (iii) neutralize virus in vitro. Following viral challenge, cutaneous papilloma growth was completely absent in rabbits immunized with either CRPV peptide. Likewise, ROPV peptide-immunized rabbits were protected from oral papillomatosis. Challenge of CRPV peptide-immune rabbits with the viral genome resulted in efficient papilloma growth, suggesting a neutralizing antibody-mediated mechanism of protection. These results afford in vivo evidence for the immunogenicity provided by a distinct region of L2 and further support previous evidence for the ability of this region to elicit antiviral immunity.