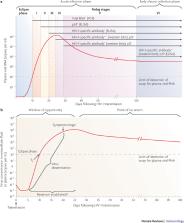 Unprecedented insight into the early stages of HIV-1 infection has provided important clues for vaccine design. Here, the authors discuss how early virological and immunological events, including transmission by a single founder virus and marked CD4 +T cell loss, might influence the course of disease.

The early immune response to HIV-1 infection is likely to be an important factor in determining the clinical course of disease. Recent data indicate that the HIV-1 quasispecies that arise following a mucosal infection are usually derived from a single transmitted virus. Moreover, the finding that the first effective immune responses drive the selection of virus escape mutations provides insight into the earliest immune responses against the transmitted virus and their contributions to the control of acute viraemia. Strong innate and adaptive immune responses occur subsequently but they are too late to eliminate the infection. In this Review, we discuss recent studies on the kinetics and quality of early immune responses to HIV-1 and their implications for developing a successful preventive HIV-1 vaccine.

Avidan U Neumann,  Victor Markowitz,  Anthony Ho … (1995)
Treatment of infected patients with ABT-538, an inhibitor of the protease of human immunodeficiency virus type 1 (HIV-1), causes plasma HIV-1 levels to decrease exponentially (mean half-life, 2.1 +/- 0.4 days) and CD4 lymphocyte counts to rise substantially. Minimum estimates of HIV-1 production and clearance and of CD4 lymphocyte turnover indicate that replication of HIV-1 in vivo is continuous and highly productive, driving the rapid turnover of CD4 lymphocytes.

Robert Andrews,  Y Cao,  C Farthing … (1994)
Virologic and immunologic studies were performed on five patients presenting with primary human immunodeficiency virus type 1 (HIV-1) infection. CD8+ cytotoxic T lymphocyte (CTL) precursors specific for cells expressing antigens of HIV-1 Gag, Pol, and Env were detected at or within 3 weeks of presentation in four of the five patients and were detected in all five patients by 3 to 6 months after presentation. The one patient with an absent initial CTL response had prolonged symptoms, persistent viremia, and low CD4+ T-cell count. Neutralizing antibody activity was absent at the time of presentation in all five patients. These findings suggest that cellular immunity is involved in the initial control of virus replication in primary HIV-1 infection and indicate a role for CTL in protective immunity to HIV-1 in vivo.

Yoshiaki Nishimura,  Cara M. Martin,  Joseph J. Mattapallil … (2005)
It has recently been established that both acute human immunodeficiency virus (HIV) and simian immunodeficiency virus (SIV) infections are accompanied by a dramatic and selective loss of memory CD4+ T cells predominantly from the mucosal surfaces. The mechanism underlying this depletion of memory CD4+ T cells (that is, T-helper cells specific to previously encountered pathogens) has not been defined. Using highly sensitive, quantitative polymerase chain reaction together with precise sorting of different subsets of CD4+ T cells in various tissues, we show that this loss is explained by a massive infection of memory CD4+ T cells by the virus. Specifically, 30-60% of CD4+ memory T cells throughout the body are infected by SIV at the peak of infection, and most of these infected cells disappear within four days. Furthermore, our data demonstrate that the depletion of memory CD4+ T cells occurs to a similar extent in all tissues. As a consequence, over one-half of all memory CD4+ T cells in SIV-infected macaques are destroyed directly by viral infection during the acute phase-an insult that certainly heralds subsequent immunodeficiency. Our findings point to the importance of reducing the cell-associated viral load during acute infection through therapeutic or vaccination strategies.

Andrew J. McMichael completed his M.B. at the University of Cambridge, UK, and his Ph.D. at the Medical Research Council (MRC) National Institute of Medical Research, London, UK. He has worked on HIV since 1987, focusing on T cell immunity and vaccine development. He has directed the MRC Human Immunology Unit, Oxford, UK, since 1998 and the Weatherall Institute of Molecular Medicine, Oxford, UK, since 2000. He is a Scientific Leadership Group member of the Center for HIV/AIDS Vaccine Immunology (CHAVI). He is a member of the European Molecular Biology Organization and a Fellow of the UK Academy of Medical Science, London, UK, and of The Royal Society, London, UK.

Persephone Borrow received her Ph.D. from the University of Cambridge, UK, in 1989. She subsequently carried out postdoctoral research at The Scripps Research Institute, La Jolla, USA, becoming an assistant member there in 1995. In 1997 she took up the post of Viral Immunology Group Leader at the newly established Edward Jenner Institute for Vaccine Research, UK, and was promoted to Senior Group Leader in 2003. She joined the University of Oxford, UK, in 2005, where she is currently a Reader in the Nuffield Department of Clinical Medicine. Her research programme focuses on innate and T cell responses to viruses that cause persistent infections, aiming to understand the roles of different types of response in protection and pathogenesis.

Nilu Goonetilleke received her Ph.D. from the Open University, UK. She is a senior immunologist responsible for coordinating all CHAVI studies within the Weatherall Institute of Molecular Medicine. Her research focus is on the immunology of infectious diseases and vaccine design, with a particular focus on T cell immunology.

Barton F. Haynes received his M.D. from Baylor College of Medicine, Houston, USA, in 1973. After completing infectious diseases and allergy and immunology training at the US National Institutes of Health (NIH), he went to Duke University in 1980. Here, he is Director of the Human Vaccine Institute, where teams of investigators are working on vaccines for emerging infections, including HIV-1, tuberculosis and pandemic influenza virus. He is currently funded by the US NIH as the leader of CHAVI, and the Bill and Melinda Gates Foundation funds his leadership of a Collaboration for AIDS Vaccine Discovery Center. He is a member of the Institute of Medicine of the National Academy of Sciences, USA, and a Fellow of the American Academy of Arts and Sciences, Cambridge, USA.