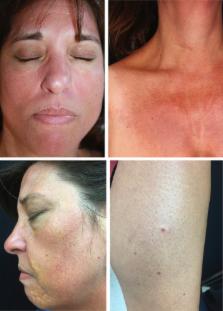 High prevalence of BRAF V600E mutations in Erdheim-Chester disease but not in other non-Langerhans cell histiocytoses.

Jean-François Emile,  Baptiste Hervier,  Nicole Brousse … (2012)
Histiocytoses are rare disorders of unknown origin with highly heterogeneous prognosis. BRAF mutations have been observed in Langerhans cell histiocytosis (LCH). We investigated the frequency of BRAF mutations in several types of histiocytoses. Histology from 127 patients with histiocytoses were reviewed. Detection of BRAF(V600) mutations was performed by pyrosequencing of DNA extracted from paraffin embedded samples. Diagnoses of Erdheim-Chester disease (ECD), LCH, Rosai-Dorfman disease, juvenile xanthogranuloma, histiocytic sarcoma, xanthoma disseminatum, interdigitating dendritic cell sarcoma, and necrobiotic xanthogranuloma were performed in 46, 39, 23, 12, 3, 2, 1, and 1 patients, respectively. BRAF status was obtained in 93 cases. BRAF(V600E) mutations were detected in 13 of 24 (54%) ECD, 11 of 29 (38%) LCH, and none of the other histiocytoses. Four patients with ECD died of disease. The high frequency of BRAF(V600E) in LCH and ECD suggests a common origin of these diseases. Treatment with vemurafenib should be investigated in patients with malignant BRAF(V600E) histiocytosis.

Dramatic efficacy of vemurafenib in both multisystemic and refractory Erdheim-Chester disease and Langerhans cell histiocytosis harboring the BRAF V600E mutation.

Zahir Amoura,  Laurent Arnaud,  Frédéric Charlotte … (2013)
Histiocytoses are rare disorders of unknown origin with highly heterogeneous prognosis. BRAFV600E gain-of-function mutations have been observed in 57% of cases of Langerhans cell histiocytosis (LCH) and 54% of cases of Erdheim-Chester disease (ECD), but not in other types of histiocytoses. Targeted therapy with an inhibitor of mutated BRAF (vemurafenib) improves survival of patients with melanoma. Here, we report vemurafenib treatment of 3 patients with multisystemic and refractory ECD carrying the BRAFV600E mutation; 2 also had skin or lymph node LCH involvement. The patients were assessed clinically, biologically (CRP values), histologically (skin biopsy), and morphologically (positron emission tomography [PET], computed tomography and magnetic resonance imaging). For all patients, vemurafenib treatment led to substantial and rapid clinical and biologic improvement, and the tumor response was confirmed by PET, computed tomography, and/or magnetic resonance imaging 1 month after treatment initiation. For the first patient treated, the PET response increased between months 1 and 4 of treatment. The treatment remained effective after 4 months of follow-up although persistent disease activity was still observed. Treatment with vemurafenib, a newly approved BRAF inhibitor, should be considered for patients with severe and refractory BRAFV600E histiocytoses, particularly when the disease is life-threatening.

Consensus guidelines for the diagnosis and clinical management of Erdheim-Chester disease.

Kenneth McClain,  Julien Haroche,  Valentina Elisabetta Viviana Ferrero … (2014)
Erdheim-Chester disease (ECD) is a rare, non-Langerhans histiocytosis. Recent findings suggest that ECD is a clonal disorder, marked by recurrent BRAFV600E mutations in >50% of patients, in which chronic uncontrolled inflammation is an important mediator of disease pathogenesis. Although ∼500 to 550 cases have been described in the literature to date, increased physician awareness has driven a dramatic increase in ECD diagnoses over the last decade. ECD frequently involves multiple organ systems and has historically lacked effective therapies. Given the protean clinical manifestations and the lack of a consensus-derived approach for the management of ECD, we provide here the first multidisciplinary consensus guidelines for the clinical management of ECD. These recommendations were outlined at the First International Medical Symposium for ECD, comprised of a comprehensive group of international academicians with expertise in the pathophysiology and therapy of ECD. Detailed recommendations on the initial clinical, laboratory, and radiographic assessment of ECD patients are presented in addition to treatment recommendations based on critical appraisal of the literature and clinical experience. These formalized consensus descriptions will hopefully facilitate ongoing and future research efforts in this disorder.