The search for novel analgesics: targets and mechanisms 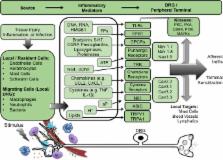 The management of the pain state is of great therapeutic relevance to virtually every medical specialty. Failure to manage its expression has deleterious consequence to the well-being of the organism. An understanding of the complex biology of the mechanisms underlying the processing of nociceptive information provides an important pathway towards development of novel and robust therapeutics. Importantly, preclinical models have been of considerable use in determining the linkage between mechanism and the associated behaviorally defined pain state. This review seeks to provide an overview of current thinking targeting pain biology, the use of preclinical models and the development of novel pain therapeutics. Issues pertinent to the strengths and weaknesses of current development strategies for analgesics are considered.

I Decosterd,  Eric C. Woolf (2000)
Peripheral neuropathic pain is produced by multiple etiological factors that initiate a number of diverse mechanisms operating at different sites and at different times and expressed both within, and across different disease states. Unraveling the mechanisms involved requires laboratory animal models that replicate as far as possible, the different pathophysiological changes present in patients. It is unlikely that a single animal model will include the full range of neuropathic pain mechanisms. A feature of several animal models of peripheral neuropathic pain is partial denervation. In the most frequently used models a mixture of intact and injured fibers is created by loose ligation of either the whole (Bennett GJ, Xie YK. A peripheral mononeuropathy in rat that produces disorders of pain sensation like those seen in man. Pain 1988;33:87-107) or a tight ligation of a part (Seltzer Z, Dubner R, Shir Y. A novel behavioral model of neuropathic pain disorders produced in rats by partial sciatic nerve injury. Pain 1990;43:205-218) of a large peripheral nerve, or a tight ligation of an entire spinal segmental nerve (Kim SH, Chung JM. An experimental model for peripheral neuropathy produced by segmental spinal nerve ligation in the rat. Pain 1992;50:355-363). We have developed a variant of partial denervation, the spared nerve injury model. This involves a lesion of two of the three terminal branches of the sciatic nerve (tibial and common peroneal nerves) leaving the remaining sural nerve intact. The spared nerve injury model differs from the Chung spinal segmental nerve, the Bennett chronic constriction injury and the Seltzer partial sciatic nerve injury models in that the co-mingling of distal intact axons with degenerating axons is restricted, and it permits behavioral testing of the non-injured skin territories adjacent to the denervated areas. The spared nerve injury model results in early ( 6 months), robust (all animals are responders) behavioral modifications. The mechanical (von Frey and pinprick) sensitivity and thermal (hot and cold) responsiveness is increased in the ipsilateral sural and to a lesser extent saphenous territories, without any change in heat thermal thresholds. Crush injury of the tibial and common peroneal nerves produce similar early changes, which return, however to baseline at 7-9 weeks. The spared nerve injury model may provide, therefore, an additional resource for unraveling the mechanisms responsible for the production of neuropathic pain.

All F1000Prime Reports articles are distributed under the terms of the Creative Commons Attribution-Non Commercial License, which permits non-commercial use, distribution, and reproduction in any medium, provided the original work is properly cited.