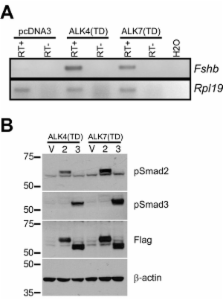 Activins stimulate pituitary FSH synthesis via transcriptional regulation of the FSHbeta subunit gene (Fshb). Like other members of the TGFbeta superfamily, these ligands signal through complexes of type I and type II receptor serine/threonine kinases. The type I receptors, or activin receptor-like kinases (ALKs), propagate intracellular signals upon ligand binding and phosphorylation by associated type II receptors. ALK4 is generally regarded as the type I receptor for activins; however, recent data suggested that activin B and AB might also signal through ALK7. Here, we examined a role for ALK7 in activin B-regulated Fshb transcription.

We analyzed ALK7 mRNA expression in immortalized gonadotrope cells, LbetaT2, and adult murine pituitary by RT-PCR. We next transfected LbetaT2 cells with wild-type and kinase-deficient (Lys to Arg, KR) forms of ALK4 and ALK7 and examined the effects of these receptors on activin A and B stimulated Fshb promoter-reporter activity. Cells were also transfected with constitutively active (Thr to Asp, TD) forms of the receptors and their effects on endogenous Fshb mRNA levels and phosphorylation of transfected Smad2/3 were measured by RT-PCR and Western blot, respectively. Finally, we measured ALK4(TD) and ALK7(TD) stimulation of Fshb transcription when endogenous Smad3 levels were depleted using short hairpin RNAs.

These data suggest that immortalized gonadotropes express ALK7 and that activin B can signal through this receptor to stimulate Fshb transcription. The relative roles of endogenous ALK4 and ALK7 receptors in mediating activin B's effects in these cells have yet to be determined.

Stefan Karlsson,  Jonas Larsson,  Peter ten Dijke … (2003)
Transforming growth factor-beta (TGFbeta) regulates the activation state of the endothelium via two opposing type I receptor/Smad pathways. Activin receptor-like kinase-1 (ALK1) induces Smad1/5 phosphorylation, leading to an increase in endothelial cell proliferation and migration, while ALK5 promotes Smad2/3 activation and inhibits both processes. Here, we report that ALK5 is important for TGFbeta/ALK1 signaling; endothelial cells lacking ALK5 are deficient in TGFbeta/ALK1-induced responses. More specifically, we show that ALK5 mediates a TGFbeta-dependent recruitment of ALK1 into a TGFbeta receptor complex and that the ALK5 kinase activity is required for optimal ALK1 activation. TGFbeta type II receptor is also required for ALK1 activation by TGFbeta. Interestingly, ALK1 not only induces a biological response opposite to that of ALK5 but also directly antagonizes ALK5/Smad signaling.

Stephanie Mathews,  Wylie Vale (1991)
Activins are involved in the regulation of multiple biological events, ranging from early development to pituitary function. To characterize the cellular mechanisms involved in these processes, cDNAs coding for an activin receptor were cloned from AtT20 mouse corticotropic cells by screening COS cell transfectants for binding of 125I-activin A. The cDNAs code for a protein of 494 amino acids comprising a ligand-binding extracellular domain, a single membrane-spanning domain, and an intracellular kinase domain with predicted serine/threonine specificity. 125I-activin A binds to transfected COS cells with an affinity of 180 pM and can be competed by activin A, activin B, and inhibin A, but not by transforming growth factor beta 1. The kinase domain, but not the extracellular sequence, of the activin receptor is most closely related to the C. elegans daf-1 gene product, a putative transmembrane serine/threonine-specific protein kinase for which the ligand is not known.

Pituitary FSH is released by a heterodimer of the beta-subunits from the two forms of inhibin.

N Ling,  S Ying,  N Ueno … (2015)
Inhibin is a gonadal protein that specifically inhibits the secretion of pituitary follicle-stimulating hormone (FSH). Two forms of inhibin (A and B) have been purified from porcine follicular fluid and characterized as heterodimers of relative molecular mass (Mr) 32,000 (ref. 2). Each inhibin is comprised of an identical alpha-subunit of Mr 18,000 and a distinct but related beta-subunit of Mr 13,800-14,700 linked by interchain disulphide bond(s). Throughout the purification of inhibins, we consistently observed two fractions which stimulated the secretion of pituitary FSH. We report here the isolation of one of the FSH-releasing proteins; it has a Mr of 24,000 and its N-terminal sequences up to residue 32 are identical to those of each beta-subunit of inhibins A and B. In the presence of reducing agents, SDS-polyacrylamide gel electrophoresis resolves the FSH-releasing substance into two subunits which are identical in their migration behaviour to the reduced beta-subunits of inhibins A and B. Based on the N-terminal sequence data and Mr of the intact and reduced molecules, we propose that the FSH-releasing substance, which is active in picomolar concentrations, is a heterodimeric protein composed of the two beta-subunits of inhibins A and B linked by interchain disulphide bond(s). The structural organization of the FSH-releasing substance is homologous to that of transforming growth factor-beta (TGF-beta), which also possesses FSH-releasing activity in the same bioassay. We suggest that the substance be called activin to signify the fact that it has opposite biological effects to inhibin.