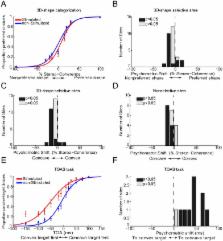 The anterior intraparietal area (AIP) of rhesus monkeys is part of the dorsal visual stream and contains neurons whose visual response properties are commensurate with a role in three-dimensional (3D) shape perception. Neuronal responses in AIP signal the depth structure of disparity-defined 3D shapes, reflect the choices of monkeys while they categorize 3D shapes, and mirror the behavioral variability across different stimulus conditions during 3D-shape categorization. However, direct evidence for a role of AIP in 3D-shape perception has been lacking. We trained rhesus monkeys to categorize disparity-defined 3D shapes and examined AIP's contribution to 3D-shape categorization by microstimulating in clusters of 3D-shape selective AIP neurons during task performance. We find that microstimulation effects on choices (monkey M1) and reaction times (monkey M1 and M2) depend on the 3D-shape preference of the stimulated site. Moreover, electrical stimulation of the same cells, during either the 3D-shape-categorization task or a saccade task, could affect behavior differently. Interestingly, in one monkey we observed a strong correlation between the strength of choice-related AIP activity (choice probabilities) and the influence of microstimulation on 3D-shape-categorization behavior (choices and reaction time). These findings propose AIP as part of the network responsible for 3D-shape perception. The results also show that the anterior intraparietal cortex contains cells with different tuning properties, i.e. 3D-shape- or saccade-related, that can be dynamically read out depending on the requirements of the task at hand.

Reorienting attention across the horizontal and vertical meridians: evidence in favor of a premotor theory of attention.

L Riggio,  C Umiltà,  I Dascola … (1986)
Stimuli presented in a non-attended location are responded to much slower than stimuli presented in an attended one. The hypotheses proposed to explain this effect make reference to covert movement of attention, hemifield inhibition, or attentional gradients. The experiment reported here was aimed at discriminating among these hypotheses. Subjects were cued to attend to one of four possible stimulus locations, which were arranged either horizontally or vertically, above, below, to the right or left of a fixation point. The instructions were to respond manually as fast as possible to the occurrence of a visual stimulus, regardless of whether it occurred in a cued or in a non-cued location. In 70% of the cued trials the stimulus was presented in the cued location and in 30% in one of the non-cued locations. In addition there were trials in which a non-directional cue instructed the subject to pay attention to all four locations. The results showed that the correct orienting of attention yielded a small but significant benefit; the incorrect orienting of attention yielded a large and significant cost; the cost tended to increase as a function of the distance between the attended location and the location that was actually stimulated; and an additional cost was incurred when the stimulated and attended locations were on opposite sides of the vertical or horizontal meridian. We concluded that neither the hypothesis postulating hemifield inhibition nor that postulating movement of attention with a constant time can explain the data. The hypothesis of an attention gradient and that of attention movements with a constant speed are tenable in principle, but they fail to account for the effect of crossing the horizontal and vertical meridians. A hypothesis is proposed that postulates a strict link between covert orienting of attention and programming explicit ocular movements. Attention is oriented to a given point when the oculomotor programme for moving the eyes to this point is ready to be executed. Attentional cost is the time required to erase one ocular program and prepare the next one.

K H Britten,  W Newsome,  C. Daniel Salzman (1990)
Neurons in the visual cortex respond selectively to perceptually salient features of the visual scene, such as the direction and speed of moving objects, the orientation of local contours, or the colour or relative depth of a visual pattern. It is commonly assumed that the brain constructs its percept of the visual scene from information encoded in the selective responses of such neurons. We have now tested this hypothesis directly by measuring the effect on psychophysical performance of modifying the firing rates of physiologically characterized neurons. We required rhesus monkeys to report the direction of motion in a visual display while we electrically stimulated clusters of directionally selective neurons in the middle temporal visual area (MT, or V5), an extrastriate area that plays a prominent role in the analysis of visual motion information. Microstimulation biased the animals' judgements towards the direction of motion encoded by the stimulated neurons. This result indicates that physiological properties measured at the neuronal level can be causally related to a specific aspect of perceptual performance.

Jochen Ditterich,  D Hanks,  Michael N. Shadlen (2006)
A central goal of cognitive neuroscience is to elucidate the neural mechanisms underlying decision-making. Recent physiological studies suggest that neurons in association areas may be involved in this process. To test this, we measured the effects of electrical microstimulation in the lateral intraparietal area (LIP) while monkeys performed a reaction-time motion discrimination task with a saccadic response. In each experiment, we identified a cluster of LIP cells with overlapping response fields (RFs) and sustained activity during memory-guided saccades. Microstimulation of this cluster caused an increase in the proportion of choices toward the RF of the stimulated neurons. Choices toward the stimulated RF were faster with microstimulation, while choices in the opposite direction were slower. Microstimulation never directly evoked saccades, nor did it change reaction times in a simple saccade task. These results demonstrate that the discharge of LIP neurons is causally related to decision formation in the discrimination task.