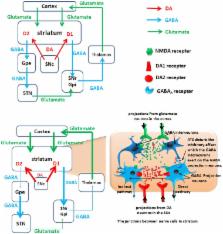 Brian Knutson,  Suzanne N Haber (2009)
Although cells in many brain regions respond to reward, the cortical-basal ganglia circuit is at the heart of the reward system. The key structures in this network are the anterior cingulate cortex, the orbital prefrontal cortex, the ventral striatum, the ventral pallidum, and the midbrain dopamine neurons. In addition, other structures, including the dorsal prefrontal cortex, amygdala, hippocampus, thalamus, and lateral habenular nucleus, and specific brainstem structures such as the pedunculopontine nucleus, and the raphe nucleus, are key components in regulating the reward circuit. Connectivity between these areas forms a complex neural network that mediates different aspects of reward processing. Advances in neuroimaging techniques allow better spatial and temporal resolution. These studies now demonstrate that human functional and structural imaging results map increasingly close to primate anatomy.

Garrett E. Alexander,  Michael Crutcher (1990)
Concepts of basal ganglia organization have changed markedly over the past decade, due to significant advances in our understanding of the anatomy, physiology and pharmacology of these structures. Independent evidence from each of these fields has reinforced a growing perception that the functional architecture of the basal ganglia is essentially parallel in nature, regardless of the perspective from which these structures are viewed. This represents a significant departure from earlier concepts of basal ganglia organization, which generally emphasized the serial aspects of their connectivity. Current evidence suggests that the basal ganglia are organized into several structurally and functionally distinct 'circuits' that link cortex, basal ganglia and thalamus, with each circuit focused on a different portion of the frontal lobe. In this review, Garrett Alexander and Michael Crutcher, using the basal ganglia 'motor' circuit as the principal example, discuss recent evidence indicating that a parallel functional architecture may also be characteristic of the organization within each individual circuit.

The role of the basal ganglia in habit formation.

William Knowlton,  Henry H. Yin (2006)
Many organisms, especially humans, are characterized by their capacity for intentional, goal-directed actions. However, similar behaviours often proceed automatically, as habitual responses to antecedent stimuli. How are goal-directed actions transformed into habitual responses? Recent work combining modern behavioural assays and neurobiological analysis of the basal ganglia has begun to yield insights into the neural basis of habit formation.