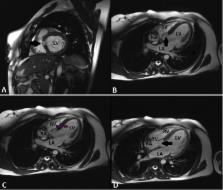 Sudden death in an adult with a small ventricular septal defect and an aneurysmal membranous septum.

Daniel S Y Ho,  B Sarubbi,  L M Gerlis … (1998)
An apparently healthy man of 26 years of age suddenly died. He was known to have had a small ventricular septal defect and complete right bundle branch block from early childhood. At post-mortem examination the small ventricular septal defect was found associated with an aneurysm of the membranous septum. Histological examination showed a normal atrioventricular node and bundle, adjacent to the aneurysm. There was fibrous interruption at the commencement of the right bundle branch, which was considered the basis of the bundle branch block. It was also considered that the right bundle branch block was of the hereditary type and that this, rather than the aneurysm of the membranous septum, was responsible for the unexpected death.