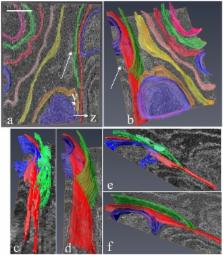 Serial block-face electron microscopy (SBEM) provides nanoscale 3D ultrastructure of embedded and stained cells and tissues in volumes of up to 10 7 µm 3. In SBEM, electrons with 1–3 keV energies are incident on a specimen block, from which backscattered electron (BSE) images are collected with x, y resolution of 5–10 nm in the block-face plane, and successive layers are removed by an in situ ultramicrotome. Spatial resolution along the z-direction, however, is limited to around 25 nm by the minimum cutting thickness. To improve the z-resolution, we have extracted depth information from BSE images acquired at dual primary beam energies, using Monte Carlo simulations of electron scattering. The relationship between depth of stain and ratio of dual-energy BSE intensities enables us to determine 3D structure with a ×2 improvement in z-resolution. We demonstrate the technique by sub-slice imaging of hepatocyte membranes in liver tissue.

J R Kremer,  D Mastronarde,  J McIntosh (2015)
We have developed a computer software package, IMOD, as a tool for analyzing and viewing three-dimensional biological image data. IMOD is useful for studying and modeling data from tomographic, serial section, and optical section reconstructions. The software allows image data to be visualized by several different methods. Models of the image data can be visualized by volume or contour surface rendering and can yield quantitative information.

Connectomic reconstruction of the inner plexiform layer in the mouse retina.

R Turaga,  V. Jain,  H. Sebastian Seung … (2013)
Comprehensive high-resolution structural maps are central to functional exploration and understanding in biology. For the nervous system, in which high resolution and large spatial extent are both needed, such maps are scarce as they challenge data acquisition and analysis capabilities. Here we present for the mouse inner plexiform layer--the main computational neuropil region in the mammalian retina--the dense reconstruction of 950 neurons and their mutual contacts. This was achieved by applying a combination of crowd-sourced manual annotation and machine-learning-based volume segmentation to serial block-face electron microscopy data. We characterize a new type of retinal bipolar interneuron and show that we can subdivide a known type based on connectivity. Circuit motifs that emerge from our data indicate a functional mechanism for a known cellular response in a ganglion cell that detects localized motion, and predict that another ganglion cell is motion sensitive.