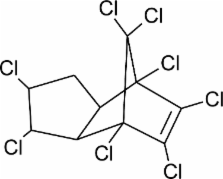 Endocrine disrupting chemicals (EDC) are compounds that alter the normal functioning of the endocrine system of both wildlife and humans. A huge number of chemicals have been identified as endocrine disruptors, among them several pesticides. Pesticides are used to kill unwanted organisms in crops, public areas, homes and gardens, and parasites in medicine. Human are exposed to pesticides due to their occupations or through dietary and environmental exposure (water, soil, air). For several years, there have been enquiries about the impact of environmental factors on the occurrence of human pathologies. This paper reviews the current knowledge of the potential impacts of endocrine disruptor pesticides on human health.

R. Blair (2000)
We have utilized a validated (standardized) estrogen receptor (ER) competitive-binding assay to determine the ER affinity for a large, structurally diverse group of chemicals. Uteri from ovariectomized Sprague-Dawley rats were the ER source for the competitive-binding assay. Initially, test chemicals were screened at high concentrations to determine whether a chemical competed with [3H]-estradiol for the ER. Test chemicals that exhibited affinity for the ER in the first tier were subsequently assayed using a wide range of concentrations to characterize the binding curve and to determine each chemical's IC50 and relative binding affinity (RBA) values. Overall, we assayed 188 chemicals, covering a 1 x 10(6)-fold range of RBAs from several different chemical or use categories, including steroidal estrogens, synthetic estrogens, antiestrogens, other miscellaneous steroids, alkylphenols, diphenyl derivatives, organochlorines, pesticides, alkylhydroxybenzoate preservatives (parabens), phthalates, benzophenone compounds, and a number of other miscellaneous chemicals. Of the 188 chemicals tested, 100 bound to the ER while 88 were non-binders. Included in the 100 chemicals that bound to the ER were 4-benzyloxyphenol, 2,4-dihydroxybenzophenone, and 2,2'-methylenebis(4-chlorophenol), compounds that have not been shown previously to bind the ER. It was also evident that certain structural features, such as an overall ring structure, were important for ER binding. The current study provides the most structurally diverse ER RBA data set with the widest range of RBA values published to date.

Sophie Mouillet-Richard, Safa Moslemi, Herbert Sipahutar … (2005)
Roundup is a glyphosate-based herbicide used worldwide, including on most genetically modified plants that have been designed to tolerate it. Its residues may thus enter the food chain, and glyphosate is found as a contaminant in rivers. Some agricultural workers using glyphosate have pregnancy problems, but its mechanism of action in mammals is questioned. Here we show that glyphosate is toxic to human placental JEG3 cells within 18 hr with concentrations lower than those found with agricultural use, and this effect increases with concentration and time or in the presence of Roundup adjuvants. Surprisingly, Roundup is always more toxic than its active ingredient. We tested the effects of glyphosate and Roundup at lower nontoxic concentrations on aromatase, the enzyme responsible for estrogen synthesis. The glyphosate-based herbicide disrupts aromatase activity and mRNA levels and interacts with the active site of the purified enzyme, but the effects of glyphosate are facilitated by the Roundup formulation in microsomes or in cell culture. We conclude that endocrine and toxic effects of Roundup, not just glyphosate, can be observed in mammals. We suggest that the presence of Roundup adjuvants enhances glyphosate bioavailability and/or bioaccumulation.

Endocrine disruption in wildlife: a critical review of the evidence.

Charles Tyler, Matthew S Jobling, David J. T. Sumpter (1998)
In recent years, a number of man-made chemicals have been shown to be able to mimic endogenous hormones, and it has been hypothesized that alterations in the normal pattern of reproductive development seen in some populations of wildlife are linked with exposure to these chemicals. Of particular importance are those compounds that mimic estrogens and androgens (and their antagonists), because of their central role in reproductive function. In fact, the evidence showing that such chemicals actually do mimic (or antagonize) the action of hormones in the intact animal is limited. In only a few cases have laboratory studies shown that chemicals that mimic hormones at the molecular level (in vitro) also cause reproductive dysfunction in vivo at environmentally relevant concentrations. In addition, the reported studies on wild populations of animals are limited to a very few animal species and they have often centered on localized 'hot-spots' of chemical discharges. Nevertheless, many of these xenobiotics are persistent and accumulate in the environment, and therefore a more widespread phenomenon of endocrine disruption in wildlife is possible. This article reviews the evidence, from both laboratory and field studies, that exposure to steroid hormone mimics may impair reproductive function and critically assesses the weight of evidence for endocrine disruption in wildlife.