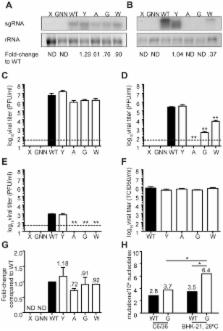 Arboviruses cycle through both vertebrates and invertebrates, which requires them to adapt to disparate hosts while maintaining genetic integrity during genome replication. To study the genetic mechanisms and determinants of these processes, we use chikungunya virus (CHIKV), a re-emerging human pathogen transmitted by the Aedes mosquito. We previously isolated a high fidelity (or antimutator) polymerase variant, C483Y, which had decreased fitness in both mammalian and mosquito hosts, suggesting this residue may be a key molecular determinant. To further investigate effects of position 483 on RNA-dependent RNA-polymerase (RdRp) fidelity, we substituted every amino acid at this position. We isolated novel mutators with decreased replication fidelity and higher mutation frequencies, allowing us to examine the fitness of error-prone arbovirus variants. Although CHIKV mutators displayed no major replication defects in mammalian cell culture, they had reduced specific infectivity and were attenuated in vivo. Unexpectedly, mutator phenotypes were suppressed in mosquito cells and the variants exhibited significant defects in RNA synthesis. Consequently, these replication defects resulted in strong selection for reversion during infection of mosquitoes. Since residue 483 is conserved among alphaviruses, we examined the analogous mutations in Sindbis virus (SINV), which also reduced polymerase fidelity and generated replication defects in mosquito cells. However, replication defects were mosquito cell-specific and were not observed in Drosophila S2 cells, allowing us to evaluate the potential attenuation of mutators in insect models where pressure for reversion was absent. Indeed, the SINV mutator variant was attenuated in fruit flies. These findings confirm that residue 483 is a determinant regulating alphavirus polymerase fidelity and demonstrate proof of principle that arboviruses can be attenuated in mammalian and insect hosts by reducing fidelity.

Chikungunya (CHIKV) is a re-emerging mosquito-borne virus that constitutes a major and growing human health burden. Like all RNA viruses, during viral replication CHIKV copies its genome using a polymerase that makes an average of one mistake per replication cycle. Therefore, a single virus generates millions of viral progeny that carry a multitude of distinct mutations in their genomes. In this study, we isolated CHIKV mutators (strains that make more errors than the wildtype virus), to study how higher mutation rates affect fitness in arthropod-borne viruses (arboviruses). CHIKV mutators have reduced virulence in mice and severe replication defects in Aedes mosquito cells. However, these replication defects result in selective pressure for reversion of mutators to a wildtype polymerase in mosquito hosts. To examine how mutators would behave in an insect model in absence of this genetic instability, we isolated mutators of a related virus, Sindbis virus (SINV). SINV mutators had no replication defect in fruit fly ( Drosophila) cells, and a SINV mutator strain was stable and attenuated in fruit flies. This work shows proof of principle that arbovirus mutators can exhibit attenuation in both mammalian and insect hosts, and may remain a viable vaccine strategy.

Changing patterns of chikungunya virus: re-emergence of a zoonotic arbovirus.

Kimberly Drake,  Greg J. Holland (1999)
The rate of spontaneous mutation is a key parameter in modeling the genetic structure and evolution of populations. The impact of the accumulated load of mutations and the consequences of increasing the mutation rate are important in assessing the genetic health of populations. Mutation frequencies are among the more directly measurable population parameters, although the information needed to convert them into mutation rates is often lacking. A previous analysis of mutation rates in RNA viruses (specifically in riboviruses rather than retroviruses) was constrained by the quality and quantity of available measurements and by the lack of a specific theoretical framework for converting mutation frequencies into mutation rates in this group of organisms. Here, we describe a simple relation between ribovirus mutation frequencies and mutation rates, apply it to the best (albeit far from satisfactory) available data, and observe a central value for the mutation rate per genome per replication of micro(g) approximately 0.76. (The rate per round of cell infection is twice this value or about 1.5.) This value is so large, and ribovirus genomes are so informationally dense, that even a modest increase extinguishes the population.

Maxime Solignat,  Bernard Gay,  Stephen Higgs … (2009)
Arboviruses (or arthropod-borne viruses), represent a threat for the new century. The 2005-2006 year unprecedented epidemics of chikungunya virus (CHIKV) in the French Reunion Island in the Indian Ocean, followed by several outbreaks in other parts of the world such as India, have attracted the attention of clinicians, scientists, and state authorities about the risks linked to this re-emerging mosquito-borne virus. CHIKV, which belongs to the Alphaviruses genus, was not previously regarded as a highly pathogenic arbovirus. However, this opinion was challenged by the death of several CHIKV-infected persons in Reunion Island. The epidemic episode began in December 2005 and four months later the seroprevalence survey report indicated that 236,000 persons, more than 30% of Reunion Island population, had been infected with CHIKV, among which 0.4-0.5% of cases were fatal. Since the epidemic peak, the infection case number has continued to increase to almost 40% of the population, with a total of more than 250 fatalities. Although information available on CHIKV is growing quite rapidly, we are still far from understanding the strategies required for the ecologic success of this virus, virus replication, its interactions with its vertebrate hosts and arthropod vectors, and its genetic evolution. In this paper, we summarize the current knowledge of CHIKV genomic organization, cell tropism, and the virus replication cycle, and evaluate the possibility to predict its future evolution. Such understanding may be applied in order to anticipate future epidemics and reduce the incidence by development and application of, for example, vaccination and antiviral therapy.