BNP as a New Biomarker of Cardiac Thyroid Hormone Function 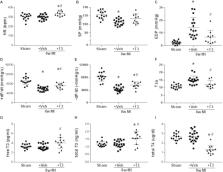 Cardiac re-expression of fetal genes in patients with heart failure (HF) suggests the presence of low cardiac tissue thyroid hormone (TH) function. However, serum concentrations of T3 and T4 are often normal or subclinically low, necessitating an alternative serum biomarker for low cardiac TH function to guide treatment of these patients. The clinical literature suggests that serum Brain Natriuretic Peptide (BNP) levels are inversely associated with serum triiodo-L-thyronine (T3) levels. The objective of this study was to investigate BNP as a potential serum biomarker for TH function in the heart.

Results from the two models of TH dysfunction confirmed an inverse relationship between tissue and serum T3 and BNP, such that the reduction in serum BNP could potentially be utilized to monitor efficacy and dosing of T3 treatment. Thus, serum BNP may serve as a reliable biomarker for cardiac TH function.

MicroRNA-208a is a regulator of cardiac hypertrophy and conduction in mice.

Monte Willis,  K Pandya,  Zhongliang Deng … (2009)
MicroRNAs (miRNAs) are a class of small noncoding RNAs that have gained status as important regulators of gene expression. Here, we investigated the function and molecular mechanisms of the miR-208 family of miRNAs in adult mouse heart physiology. We found that miR-208a, which is encoded within an intron of alpha-cardiac muscle myosin heavy chain gene (Myh6), was actually a member of a miRNA family that also included miR-208b, which was determined to be encoded within an intron of beta-cardiac muscle myosin heavy chain gene (Myh7). These miRNAs were differentially expressed in the mouse heart, paralleling the expression of their host genes. Transgenic overexpression of miR-208a in the heart was sufficient to induce hypertrophic growth in mice, which resulted in pronounced repression of the miR-208 regulatory targets thyroid hormone-associated protein 1 and myostatin, 2 negative regulators of muscle growth and hypertrophy. Studies of the miR-208a Tg mice indicated that miR-208a expression was sufficient to induce arrhythmias. Furthermore, analysis of mice lacking miR-208a indicated that miR-208a was required for proper cardiac conduction and expression of the cardiac transcription factors homeodomain-only protein and GATA4 and the gap junction protein connexin 40. Together, our studies uncover what we believe are novel miRNA-dependent mechanisms that modulate cardiac hypertrophy and electrical conduction.

Nadeem Sarwar,  Reeta Gobin,  Vilmundur Gudnason … (2009)
Measurement of B-type natriuretic peptide (BNP) concentration or its precursor (N-terminal fragment [NT-proBNP]) is recommended in patients with symptoms of left ventricular dysfunction and in other settings, but the relevance of these peptides to cardiovascular disease (CVD) in general populations or in patients with stable vascular disease is uncertain. Data were collated from 40 long-term prospective studies involving a total of 87 474 participants and 10 625 incident CVD outcomes. In a comparison of individuals in the top third with those in the bottom third of baseline values of natriuretic peptides, the combined risk ratio (RR), adjusted for several conventional risk factors, was 2.82 (95% confidence interval [CI], 2.40 to 3.33) for CVD. Analysis of the 6 studies with at least 250 CVD outcomes (which should be less prone to selective reporting than are smaller studies) yielded an adjusted RR of 1.94 (95% CI, 1.57 to 2.39). RRs were broadly similar with BNP or NT-proBNP (RR, 2.89 [95% CI, 1.91 to 4.38] and 2.82 [95% CI, 2.35 to 3.38], respectively) and by different baseline vascular risk (RR, 2.68 [95% CI, 2.07 to 3.47] in approximately general populations; RR, 3.35 [95% CI, 2.38 to 4.72] in people with elevated vascular risk factors; RR, 2.60 [95% CI, 1.99 to 3.38] in patients with stable CVD). Assay of BNP or NT-proBNP in addition to measurement of conventional CVD risk factors yielded generally modest improvements in risk discrimination. Available prospective studies indicate strong associations between circulating concentration of natriuretic peptides and CVD risk under a range of different circumstances. Further investigation is warranted, particularly in large general population studies, to clarify any predictive utility of these markers and to better control for publication bias.

This article was submitted to Clinical and Translational Physiology, a section of the journal Frontiers in Physiology