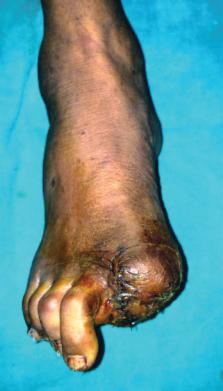 ScienceOpenPMC
Bookmark
There is no author summary for this article yet. Authors can add summaries to their articles on ScienceOpen to make them more accessible to a non-specialist audience.
DEAR EDITOR The Malignant melanoma is an uncommon primary malignant tumour of the foot. 1 It occurs in different forms like superficial spreading, nodular, lentiginous and acral. Amelanotic/hypomelanotic melanoma is a non-pigmented variety of cutaneous melanoma accounting for 2-8% of all primary melanomas. 2 , 3 The lesion is usually exophytic and ulcerative with or without metastasis. The lesions usually begin in subungal location of toe and because of absence of pigment, the lesion is often misdiagnosed. Hence diagnosis by histopathological examination and metastatic work up is necessary. 2 , 3 We highlight a case of primary amelanotic melanoma of the left great toe treated by digital amputation. A 65-year-old male presented with a 10 month old painful ulcero-proliferative growth on the great toe of the left foot. The small nodular lesion was started on plantar aspect of the toe and progressed to the size of 4x5 cm with development of ulceration and irregular margins over the period of 3 months (Figure 1). On clinical examination no lymphadenopathy was palpable. The digital amputation of left great toe with 1 cm margin clearance (Figure 2) was done and specimen sent for histopathological examination. Histopathological microphotograph (Figure 3) shows nodular aggregates of course pigmented malignant cells extending deeply within the dermis with abnormal mitosis suggestive of malignant melanoma. Fig. 1 Ulceroproliferative lesion of the left great toe Fig. 2 Postoperative photograph after digital amputation Fig. 3 Histology of hypomenocytic melanoma Amelanotic/hypomelanocytic malignant melanoma most often occur in sun-exposed skin of elderly people. 4 These melanomas comprise only 2-8% 2 , 3 of melanomas and clinical features mimic a variety of benign and malignant skin conditions and therefore are commonly misdiagnosed. Early diagnosis is vital for the effective management of this condition. Amelanotic/hypomelanocytic melanoma is most commonly subungual, localized and appearing like an exophytic papular or plaque-like reddish lesion and is often ulcerated. 4 Despite the lack of pigmentation of these lesions special stains and immunohistochemistry will confirm the melanocytic nature of the lesion. 5 - 8 Common clinical misdiagnoses of amelanotic melanoma include basal cell carcinoma, seborrhoeic keratosis, pyogenic granuloma, naevus, keratoacanthoma, verruca vulgaris, dermatitis, actinic keratosis, dermatofibroma and Bowen’s disease. 4 The misdiagnosis rates of 33–67% have been reported in literature. 9 , 10 In summary, though amelanotic melanoma of the toe is a rare clinicopathological entity in foot engender a life and demand early biopsy for confirmation of diagnosis with histopathology. CONFLICT OF INTEREST The authors declare no conflict of interest.

R Bono,  A. Veronesi,  G Argenziano … (2004)
Amelanotic malignant melanoma is a subtype of cutaneous melanoma with little or no pigment on visual inspection. It may mimic benign and malignant variants of both melanocytic and nonmelanocytic lesions. To evaluate whether dermoscopy is also a useful technique for the diagnosis of amelanotic/hypomelanotic melanoma (AHM). We conducted a retrospective clinical study of 151 amelanotic/hypomelanotic skin lesions from 151 patients with a mean age of 47 years (+/- 17.5 SD). Digitized images of amelanotic/hypomelanotic skin lesions were converted to JPEG format and sent by e-mail from the five participating centres. Lesions included 55 amelanotic/hypomelanotic nonmelanocytic lesions (AHNML), 52 amelanotic/hypomelanotic benign melanocytic lesions (AHBML), and 44 AHM, 10 (23%) of which were nonpigmented, truly amelanotic melanomas (AM). The 44 AHM lesions were divided into thin melanomas (TnM) 1 mm (15 cases), according to the Breslow index. Five clinical features (elevation, ulceration, shape, borders and colour) as well as 10 dermoscopic criteria (pigment network, pigmentation, streaks, dots/globules, blue-whitish veil, regression structures, hypopigmentation, leaf-like areas, multiple grey-bluish globules, central white patch) and eight vascular patterns (comma, arborizing, hairpin, dotted, linear irregular, dotted and linear irregular vessels, and milky-red areas) were evaluated in order to achieve clinical and dermoscopic diagnoses. Statistical analyses were performed with the chi2-test and Fisher's exact test, when appropriate. The most frequent and significant clinical features for TnM and TkM were asymmetry and ulceration (the latter only for TkM) compared with AHBML. Irregular dots/globules (62% vs. 35%; P