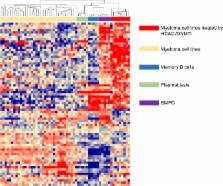 Multiple myeloma (MM) is the second most common hematologic malignancy. Aberrant epigenetic modifications have been reported in MM and could be promising therapeutic targets. As response rates are overall limited but deep responses occur, it is important to identify those patients who could indeed benefit from epigenetic-targeted therapy.

Since HDACi and DNMTi combination have potential therapeutic value in MM, we aimed to build a GEP-based score that could be useful to design future epigenetic-targeted combination trials. In addition, we investigated the changes in GEP upon HDACi/DNMTi treatment.

We report a new gene expression-based score to predict MM cell sensitivity to the combination of DNMTi/HDACi. A high Combo score in MM patients identified a group with a worse overall survival but a higher sensitivity of their MM cells to DNMTi/HDACi therapy compared to a low Combo score. In addition, treatment with DNMTi/HDACi downregulated IRF4 and MYC expression and appeared to induce a mature BMPC plasma cell gene expression profile in myeloma cell lines.

In conclusion, we developed a score for the prediction of primary MM cell sensitivity to DNMTi/HDACi and found that this combination could be beneficial in high-risk patients by targeting proliferation and inducing maturation.

The molecular classification of multiple myeloma.

Mauricio Pineda-Roman,  Jeffrey Sawyer,  E. J. Anaissie … (2006)
To better define the molecular basis of multiple myeloma (MM), we performed unsupervised hierarchic clustering of mRNA expression profiles in CD138-enriched plasma cells from 414 newly diagnosed patients who went on to receive high-dose therapy and tandem stem cell transplants. Seven disease subtypes were validated that were strongly influenced by known genetic lesions, such as c-MAF- and MAFB-, CCND1- and CCND3-, and MMSET-activating translocations and hyperdiploidy. Indicative of the deregulation of common pathways by gene orthologs, common gene signatures were observed in cases with c-MAF and MAFB activation and CCND1 and CCND3 activation, the latter consisting of 2 subgroups, one characterized by expression of the early B-cell markers CD20 and PAX5. A low incidence of focal bone disease distinguished one and increased expression of proliferation-associated genes of another novel subgroup. Comprising varying fractions of each of the other 6 subgroups, the proliferation subgroup dominated at relapse, suggesting that this signature is linked to disease progression. Proliferation and MMSET-spike groups were characterized by significant overexpression of genes mapping to chromosome 1q, and both exhibited a poor prognosis relative to the other groups. A subset of cases with a predominating myeloid gene expression signature, excluded from the profiling analyses, had more favorable baseline characteristics and superior prognosis to those lacking this signature.

A validated gene expression model of high-risk multiple myeloma is defined by deregulated expression of genes mapping to chromosome 1.

Open Access This article is licensed under a Creative Commons Attribution-NonCommercial-ShareAlike 4.0 International License, which permits any non-commercial use, sharing, adaptation, distribution and reproduction in any medium or format, as long as you give appropriate credit to the original author(s) and the source, provide a link to the Creative Commons license, and indicate if changes were made. If you remix, transform, or build upon this article or a part thereof, you must distribute your contributions under the same license as the original. The images or other third party material in this article are included in the article’s Creative Commons license, unless indicated otherwise in a credit line to the material. If material is not included in the article’s Creative Commons license and your intended use is not permitted by statutory regulation or exceeds the permitted use, you will need to obtain permission directly from the copyright holder. To view a copy of this license, visit http://creativecommons.org/licenses/by-nc-sa/4.0/.