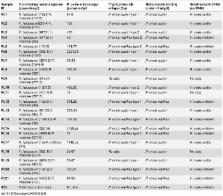 High sensitivity of detection of human malaria parasites by the use of nested polymerase chain reaction.

Mathieu Rougemont, Madeleine Van Saanen, Roland Sahli … (2004)
There have been reports of increasing numbers of cases of malaria among migrants and travelers. Although microscopic examination of blood smears remains the "gold standard" in diagnosis, this method suffers from insufficient sensitivity and requires considerable expertise. To improve diagnosis, a multiplex real-time PCR was developed. One set of generic primers targeting a highly conserved region of the 18S rRNA gene of the genus Plasmodium was designed; the primer set was polymorphic enough internally to design four species-specific probes for P. falciparum, P. vivax, P. malarie, and P. ovale. Real-time PCR with species-specific probes detected one plasmid copy of P. falciparum, P. vivax, P. malariae, and P. ovale specifically. The same sensitivity was achieved for all species with real-time PCR with the 18S screening probe. Ninety-seven blood samples were investigated. For 66 of them (60 patients), microscopy and real-time PCR results were compared and had a crude agreement of 86% for the detection of plasmodia. Discordant results were reevaluated with clinical, molecular, and sequencing data to resolve them. All nine discordances between 18S screening PCR and microscopy were resolved in favor of the molecular method, as were eight of nine discordances at the species level for the species-specific PCR among the 31 samples positive by both methods. The other 31 blood samples were tested to monitor the antimalaria treatment in seven patients. The number of parasites measured by real-time PCR fell rapidly for six out of seven patients in parallel to parasitemia determined microscopically. This suggests a role of quantitative PCR for the monitoring of patients receiving antimalaria therapy.

Colin J Sutherland, Naowarat Tanomsing, Spencer N. White … (2010)
Malaria in humans is caused by apicomplexan parasites belonging to 5 species of the genus Plasmodium. Infections with Plasmodium ovale are widely distributed but rarely investigated, and the resulting burden of disease is not known. Dimorphism in defined genes has led to P. ovale parasites being divided into classic and variant types. We hypothesized that these dimorphs represent distinct parasite species. Multilocus sequence analysis of 6 genetic characters was carried out among 55 isolates from 12 African and 3 Asia-Pacific countries. Each genetic character displayed complete dimorphism and segregated perfectly between the 2 types. Both types were identified in samples from Ghana, Nigeria, São Tomé, Sierra Leone, and Uganda and have been described previously in Myanmar. Splitting of the 2 lineages is estimated to have occurred between 1.0 and 3.5 million years ago in hominid hosts. We propose that P. ovale comprises 2 nonrecombining species that are sympatric in Africa and Asia. We speculate on possible scenarios that could have led to this speciation. Furthermore, the relatively high frequency of imported cases of symptomatic P. ovale infection in the United Kingdom suggests that the morbidity caused by ovale malaria has been underestimated.

The work described herein was funded partly by the Uniformed Services University of the Health Sciences Internal Grant RO87N7 (VAS) and partly by the National Institutes of Health 5R01AI104423-02 (VAS and SL). The funders had no role in study design, data collection and analysis, decision to publish, or preparation of the manuscript.