Radiation-induced unrepairable DSBs: their role in the late effects of radiation and possible applications to biodosimetry 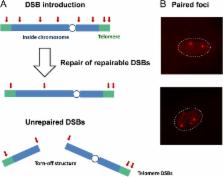 Although the vast majority of DNA damage induced by radiation exposure disappears rapidly, some lesions remain in the cell nucleus in very small quantities for days to months. These lesions may cause a considerable threat to an organism and include certain types of DNA double-strand breaks (DSBs) called ‘unrepairable DSBs’. Unrepairable DSBs are thought to cause persistent malfunctioning of cells and tissues or cause late effects of radiation, especially the induction of delayed cell death, mutation, senescence, or carcinogenesis. Moreover, the measurement of unrepairable DSBs could potentially be used for retrospective biodosimetry or for identifying individuals at greater risk for developing the adverse effects associated with radiotherapy or chemotherapy. This review summarizes the concept of unrepairable DSBs in the context of persistent repair foci formed at DSBs.

ATM and DNA-PK function redundantly to phosphorylate H2AX after exposure to ionizing radiation.

Markus Lobrich,  P. A. Jeggo,  Kuniyoshi Iwabuchi … (2004)
H2AX phosphorylation is an early step in the response to DNA damage. It is widely accepted that ATM (ataxia telangiectasia mutated protein) phosphorylates H2AX in response to DNA double-strand breaks (DSBs). Whether DNA-dependent protein kinase (DNA-PK) plays any role in this response is unclear. Here, we show that H2AX phosphorylation after exposure to ionizing radiation (IR) occurs to similar extents in human fibroblasts and in mouse embryo fibroblasts lacking either DNA-PK or ATM but is ablated in ATM-deficient cells treated with LY294002, a drug that specifically inhibits DNA-PK. Additionally, we show that inactivation of both DNA-PK and ATM is required to ablate IR-induced H2AX phosphorylation in chicken cells. We confirm that H2AX phosphorylation induced by DSBs in nonreplicating cells is ATR (ataxia telangiectasia and Rad3-related protein) independent. Taken together, we conclude that under most normal growth conditions, IR-induced H2AX phosphorylation can be carried out by ATM and DNA-PK in a redundant, overlapping manner. In contrast, DNA-PK cannot phosphorylate other proteins involved in the checkpoint response, including chromatin-associated Rad17. However, by phosphorylating H2AX, DNA-PK can contribute to the presence of the damage response proteins MDC1 and 53BP1 at the site of the DSB.

N Popescu,  Izumi Horikawa,  J. Barrett … (2004)
Humans and animals undergo ageing, and although their primary cells undergo cellular senescence in culture, the relationship between these two processes is unclear. Here we show that gamma-H2AX foci (gamma-foci), which reveal DNA double-strand breaks (DSBs), accumulate in senescing human cell cultures and in ageing mice. They colocalize with DSB repair factors, but not significantly with telomeres. These cryptogenic gamma-foci remain after repair of radiation-induced gamma-foci, suggesting that they may represent DNA lesions with unrepairable DSBs. Thus, we conclude that accumulation of unrepairable DSBs may have a causal role in mammalian ageing.