Prevalence of and risk factors for Modic change in patients with symptomatic cervical spondylosis: an observational study 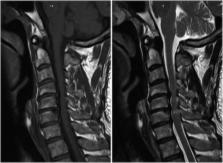 Between January 2014 and April 2017, patients with cervical spondylosis were included in our study. All patients underwent magnetic resonance imaging (MRI) to evaluate the presence of MC. The MC was classified into three types according to the Modic classification. Potential risk factors were collected from demographic data, lifestyle variables, laboratory tests, and radiographic images. Both univariate and multivariate analysis were used to detect factors associated with MC. We further compared several variables related to fat metabolism between patients with Type 1 and Type 2 MC.

It appears that advanced age and high BMI were two factors that may be responsible for cervical MC. Type 1 MC is associated with the prevalence of neck pain. However, we cannot confirm that Type 2 MC is correlated with fat metabolism.

Intervertebral discs which cause low back pain secrete high levels of proinflammatory mediators.

J G Burke,  R W G Watson,  D McCormack … (2002)
Herniated intervertebral disc tissue has been shown to produce a number of proinflammatory mediators and cytokines, but there have been no similar studies using discs from patients with discogenic low back pain. We have compared the levels of production of interleukin-6 (IL-6), interleukin-8 (IL-8) and prostaglandin E2 (PGE2) in disc tissue from patients undergoing discectomy for sciatica (63) with that from patients undergoing fusion for discogenic low back pain (20) using an enzyme-linked immunoabsorbent assay. There was a statistically significant difference between levels of production of IL-6 and IL-8 in the sciatica and low back pain groups (p < 0.006 and p < 0.003, respectively). The high levels of proinflammatory mediator found in disc tissue from patients undergoing fusion suggest that production of proinflammatory mediators within the nucleus pulposus may be a major factor in the genesis of a painful lumbar disc.

Joan Sorensen,  Jaro Karppinen,  Jaakko Niinimäki … (2008)
The prevalence of "vertebral endplate signal changes" (VESC) and its association with low back pain (LBP) varies greatly between studies. This wide range in reported prevalence rates and associations with LBP could be explained by differences in the definitions of VESC, LBP, or study sample. The objectives of this systematic critical review were to investigate the current literature in relation to the prevalence of VESC (including Modic changes) and the association with non-specific low back pain (LBP). The MEDLINE, EMBASE, and SveMED databases were searched for the period 1984 to November 2007. Included were the articles that reported the prevalence of VESC in non-LBP, general, working, and clinical populations. Included were also articles that investigated the association between VESC and LBP. Articles on specific LBP conditions were excluded. A checklist including items related to the research questions and overall quality of the articles was used for data collection and quality assessment. The reported prevalence rates were studied in relation to mean age, gender, study sample, year of publication, country of study, and quality score. To estimate the association between VESC and LBP, 2 x 2 tables were created to calculate the exact odds ratio (OR) with 95% confidence intervals. Eighty-two study samples from 77 original articles were identified and included in the analysis. The median of the reported prevalence rates for any type of VESC was 43% in patients with non-specific LBP and/or sciatica and 6% in non-clinical populations. The prevalence was positively associated with age and was negatively associated with the overall quality of the studies. A positive association between VESC and non-specific LBP was found in seven of ten studies from the general, working, and clinical populations with ORs from 2.0 to 19.9. This systematic review shows that VESC is a common MRI-finding in patients with non-specific LBP and is associated with pain. However, it should be noted that VESC may be present in individuals without LBP.