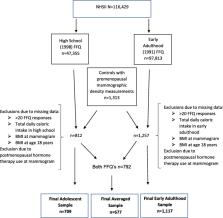 This study included control participants with premenopausal mammograms from an existing breast cancer case-control study nested within the NHSII who completed a Food Frequency Questionnaire in 1998 about their diet during high school (HS-FFQ) (n = 685) and/or a Food Frequency Questionnaire in 1991 (Adult-FFQ) when they were 27–44 years old (n = 1068). Digitized analog film mammograms were used to calculate the percent density, absolute dense, and non-dense areas. Generalized linear models were fit to evaluate the associations of a pro-inflammatory dietary pattern and the Alternative Healthy Eating Index (AHEI, an anti-inflammatory dietary pattern) with each breast density measure.

To our knowledge, this is the first study to evaluate the dietary patterns during adolescence and early adulthood in relation to mammographic density phenotypes. Our findings do not support an association between adolescent and early adulthood diet and breast density in mid-adulthood that is independent of BMI or other breast cancer risk factors.

Food-based validation of a dietary questionnaire: the effects of week-to-week variation in food consumption.

B Rosner,  S Salvini,  M Stampfer … (1989)
The reproducibility and validity of responses for 55 specific foods and beverages on a self-administered food frequency questionnaire were evaluated. One hundred and seventy three women from the Nurses' Health Study completed the questionnaire twice approximately 12 months apart and also recorded their food consumption for seven consecutive days, four times during the one-year interval. For the 55 foods, the mean of correlation coefficients between frequencies of intake for first versus second questionnaire was 0.57 (range = 0.24 for fruit punch to 0.93 for beer). The mean of correlation coefficients between the dietary records and first questionnaire was 0.44 (range = 0.09 for yellow squash to 0.83 for beer and tea) and between the dietary records and the second questionnaire was 0.52 (range = 0.08 for spinach to 0.90 for tea). Ratios of within- to between-person variance for the 55 foods were computed using the mean four one-week dietary records for each person as replicate measurements. For most foods this ratio was greater than 1.0 (geometric mean of ratios = 1.88), ranging from 0.25 (skimmed milk) to 14.76 (spinach). Correlation coefficients comparing questionnaire and dietary record for the 55 foods were corrected for the within-person variation (mean corrected value = 0.55 for dietary record versus first questionnaire and 0.66 versus the second). Mean daily amounts of each food calculated by the questionnaire and by the dietary record were also compared; the observed differences suggested that responses to the questionnaire tended to over-represent socially desirable foods. This analysis documents the validity and reproducibility of the questionnaire for measuring specific foods and beverages, as well as the large within-person variation for food intake measured by dietary records. Differences in the degree of validity for specific foods revealed in this type of analysis can be useful in improving questionnaire design and in interpreting findings from epidemiological studies that use the instrument.

Application of a new statistical method to derive dietary patterns in nutritional epidemiology.

Anja Schienkiewitz,  Matthias B. Schulze,  Kurt Hoffmann … (2004)
Because foods are consumed in combination, it is difficult in observational studies to separate the effects of single foods on the development of diseases. A possible way to examine the combined effect of food intakes is to derive dietary patterns by using appropriate statistical methods. The objective of this study was to apply a new statistical method, reduced rank regression (RRR), that is more flexible and powerful than the classic principal component analysis. RRR can be used efficiently in nutritional epidemiology by choosing disease-specific response variables and determining combinations of food intake that explain as much response variation as possible. The authors applied RRR to extract dietary patterns from 49 food groups, specifying four diabetes-related nutrients and nutrient ratios as responses. Data were derived from a nested German case-control study within the European Prospective Investigation into Cancer and Nutrition-Potsdam study consisting of 193 cases with incident type 2 diabetes identified until 2001 and 385 controls. The four factors extracted by RRR explained 93.1% of response variation, whereas the first four factors obtained by principal component analysis accounted for only 41.9%. In contrast to principal component analysis and other methods, the new RRR method extracted a significant risk factor for diabetes.