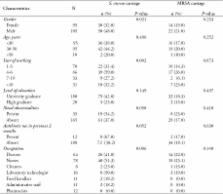 Among the 200 isolates, 80 (40%) were S. aureus carriers, and 36 (18%) of all HCWs were identified as MRSA carriers. There was a significant difference of S. aureus according to gender with male carriers ( p=0.012), occupation particularly among nurses ( p=0.006), and duration of working years in the hospital among 4-6 years group ( p=0.002). Moreover, none of the risk factors assessed were significantly associated with the carriage rate of MRSA ( p>0.05).

The current study revealed that nursing staff was the potential colonizers of S. aureus and MRSA compared with other HCWs. Regular screening of carriers is required for prevention of nosocomial infections.

The role of nasal carriage in Staphylococcus aureus infections.

Damian Melles,  M. Vos,  Kim J. J. M. Nouwen … (2005)
Staphylococcus aureus is a frequent cause of infections in both the community and hospital. Worldwide, the increasing resistance of this pathogen to various antibiotics complicates treatment of S aureus infections. Effective measures to prevent S aureus infections are therefore urgently needed. It has been shown that nasal carriers of S aureus have an increased risk of acquiring an infection with this pathogen. The nose is the main ecological niche where S aureus resides in human beings, but the determinants of the carrier state are incompletely understood. Eradication of S aureus from nasal carriers prevents infection in specific patient categories-eg, haemodialysis and general surgery patients. However, recent randomised clinical trials in orthopaedic and non-surgical patients failed to show the efficacy of eliminating S aureus from the nose to prevent subsequent infection. Thus we must elucidate the mechanisms behind S aureus nasal carriage and infection to be able to develop new preventive strategies. We present an overview of the current knowledge of the determinants (both human and bacterial) and risks of S aureus nasal carriage. Studies on the population dynamics of S aureus are also summarised.

Werner Albrich,  Stephan Harbarth (2008)
There is ongoing controversy about the role of health-care workers in transmission of meticillin-resistant Staphylococcus aureus (MRSA). We did a search of the literature from January, 1980, to March, 2006, to determine the likelihood of MRSA colonisation and infection in health-care workers and to assess their role in MRSA transmission. In 127 investigations, the average MRSA carriage rate among 33 318 screened health-care workers was 4.6%; 5.1% had clinical infections. Risk factors included chronic skin diseases, poor hygiene practices, and having worked in countries with endemic MRSA. Both transiently and persistently colonised health-care workers were responsible for several MRSA clusters. Transmission from personnel to patients was likely in 63 (93%) of 68 studies that undertook genotyping. MRSA eradication was achieved in 449 (88%) of 510 health-care workers. Subclinical infections and colonisation of extranasal sites were associated with persistent carriage. We discuss advantages and disadvantages of screening and eradication policies for MRSA control and give recommendations for the management of colonised health-care workers in different settings.

Co-evolutionary aspects of human colonisation and infection by Staphylococcus aureus.

A VANBELKUM,  D C Melles,  J Nouwen … (2009)
Although Staphylococcus aureus is a bacterial species of medical significance, only approximately 30% of all humans carry staphylococcal cells persistently but asymptomatically in their nasopharynx and/or other body sites. This goes largely unnoticed by the host, which shows that in the natural situation the human ecosystem is hospitable or at least receptive to the bacteria and that by a process of co-evolution this has lead to a state of mutual acceptance or tolerance. However, upon disturbance of this balanced, neutral state, localized or disseminated invasive infection can occur. Unfortunately, the events leading to infection are still largely unknown and especially the causal events leading to the transition from colonization to infection are ill-defined in vivo. Whether certain genotypes of S. aureus are more prone to colonise and/or infect humans is still quite heavily debated. The genetic population structure of S. aureus has been largely solved by using a number of different DNA polymorphism-interrogating laboratory methods. However, even this major effort has not (yet) revealed major clues with respect to colonisation and infection potency of the clonal lineages that were thus identified, except for the fact that certain lineages are highly epidemic. The overall picture is that in principle all S. aureus strains can become invasive given the proper circumstances. What these, primarily host-defined circumstances are is still enigmatic. However, a large variety of staphylococcal virulence and colonization factors have been identified as well as a number of host' colonisation and infection susceptibility traits. How these are specifically involved in colonisation and infection has been experimentally substantiated in only a limited number of cases. The present review paper will explore the relevance of these and other, for instance environmental factors that define the colonisation or infection state in humans. When the nature of these states would be known in more detail, this knowledge could be used to design novel and empirical, knowledge-driven means of preventing colonisation from proceeding into S. aureus infection.