The world Polleniidae (Diptera, Oestroidea): key to genera and checklist of species 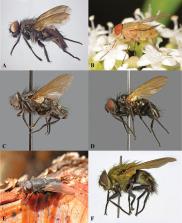 Thomas Pape,  Paul Beuk,  Adrian Pont … (2015)
Abstract Fauna Europaea provides a public web-service with an index of scientific names (including important synonyms) of all extant multicellular European terrestrial and freshwater animals and their geographical distribution at the level of countries and major islands (east of the Urals and excluding the Caucasus region). The Fauna Europaea project comprises about 230,000 taxonomic names, including 130,000 accepted species and 14,000 accepted subspecies, which is much more than the originally projected number of 100,000 species. Fauna Europaea represents a huge effort by more than 400 contributing taxonomic specialists throughout Europe and is a unique (standard) reference suitable for many user communities in science, government, industry, nature conservation and education. The Diptera – Brachycera is one of the 58 Fauna Europaea major taxonomic groups, and data have been compiled by a network of 55 specialists. Within the two-winged insects ( Diptera ), the Brachycera constitute a monophyletic group, which is generally given rank of suborder. The Brachycera may be classified into the probably paraphyletic 'lower brachyceran grade' and the monophyletic Eremoneura . The latter contains the Empidoidea , the Apystomyioidea with a single Nearctic species, and the Cyclorrhapha , which in turn is divided into the paraphyletic 'aschizan grade' and the monophyletic Schizophora . The latter is traditionally divided into the paraphyletic 'acalyptrate grade' and the monophyletic Calyptratae . Our knowledge of the European fauna of Diptera – Brachycera varies tremendously among families, from the reasonably well known hoverflies ( Syrphidae ) to the extremely poorly known scuttle flies ( Phoridae ). There has been a steady growth in our knowledge of European Diptera for the last two centuries, with no apparent slow down, but there is a shift towards a larger fraction of the new species being found among the families of the nematoceran grade (lower Diptera ), which due to a larger number of small-sized species may be considered as taxonomically more challenging. Most of Europe is highly industrialised and has a high human population density, and the more fertile habitats are extensively cultivated. This has undoubtedly increased the extinction risk for numerous species of brachyceran flies, yet with the recent re-discovery of Thyreophora cynophila (Panzer), there are no known cases of extinction at a European level. However, few national Red Lists have extensive information on Diptera . For the Diptera – Brachycera , data from 96 families containing 11,751 species are included in this paper.